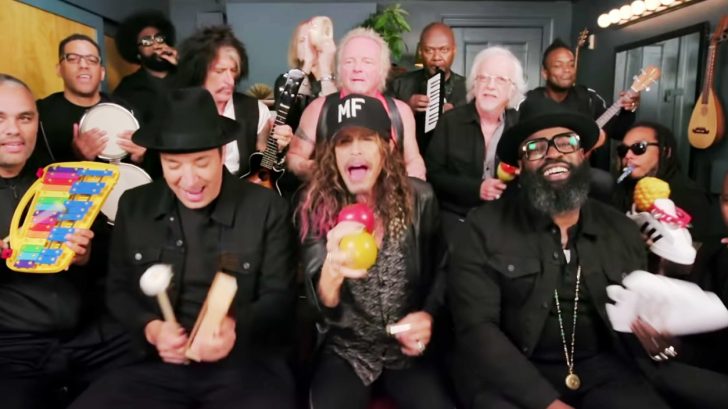 Alongside his Aerosmith bandmates, Jimmy Fallon, and his in-house band The Roots, Steven Tyler shakes his maraca unlike anything you’ve ever seen before…but that’s not all that happened!

The Tonight Show which is hosted by the always-loveable Jimmy Fallon has been known to bring a number of famous musicians onto the show. And once they get there, they do all sorts of zany stuff…like playing an entire song with toy instruments.

This new take on his hysterical segment features a total for 14 musicians gathered in a tiny space and playing all sorts of toy instruments – ranging from a maraca, to a colored tiny xylophone, to even a shoe.

All the members of Aerosmith are decked out with a fun instrument and Steven Tyler is sitting squarely in front of the camera shaking his maraca with the vigor of a heavy-duty 1970s washing machine.

“Classroom Instruments” has become a fan-favorite part of his show and is a recurring segment for the show. Especially when they have big-name artists coming on board.

All the musicians sing the lyrics and jam out as hardcore as possible in this new and refreshing take on the hit Aerosmith song “Walk This Way.”

Truly unlike anything you’ve ever heard, this toy-instrument and legendary musician combo is something that will have y’all giggling and jamming along.

I'm not a Jimmy Fallon fan, but I love Aerosmith. This is great.

While most of the instruments make sense for this segment, some have raised questions (and humorous remarks) with fans. Wooden blocks, for example, make some sense – but what about this shoe thing?

Commentors on YouTube went hog wild over the use of a seemingly-soundless Adidas sneaker being featured prominently in the video.

But the fun didn’t stop there with fellow fans lining up to deliver a one-two punchline that will have you rolling with laughter!

Yes, folks. That shoe had SO. MUCH. SOLE.

Check out the full video below with Aerosmith, Jimmy Fallon, and The Roots jamming their best “Walk This Way” with toy instruments!

Rock out with Aerosmith, Jimmy Fallon, and The Roots as they sing their hit "Walk This Way" with classroom instruments!