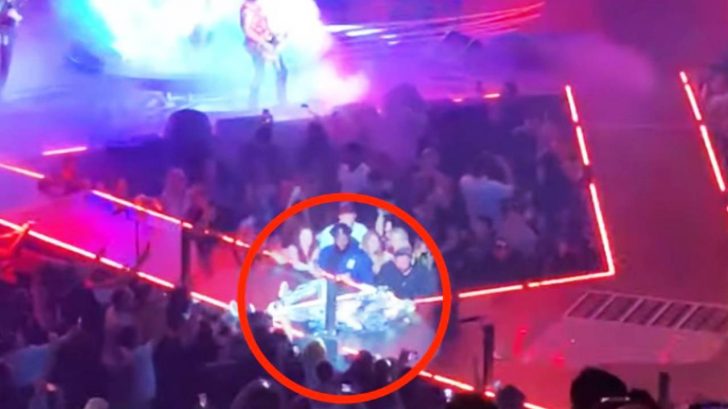 Since the 1970s, Aerosmith has been selling out arenas and putting on countless incredible performances. Chances are, in the five decades they’ve been performing, not every show has gone perfectly planned.

In 2019, the legendary rock band had been performing at their Dueces Are Wild Las Vegas residency. When they kicked off the East Coast leg of their tour, they had a three-night stint at MGM National Harbor in National Harbor, Maryland on August 8, 10, and 13.

During their first night at MGM National Harbor, the band played a 15-song set with two encores. During their encore performance of their legendary song “Walk This Way,” it didn’t turn out like they rehearsed.

While his bandmates were playing the iconic musical break, lead singer Steven Tyler walked down the catwalk, and at the end of the runway, slipped and fell down right before the verse. Now, some people would just lay there and laugh, but not Steven!

Ever the professional (and rockstar) Steven just lifted his microphone to his mouth and sang right there from the floor! A stage hand ran to help him, but when seeing he clearly didn’t need it, he backed off a bit.

After a few lyrics, he got to his knees and belted the chorus, sending the whole arena into applause.

If there’s one thing Steven Tyler does well, it’s perform with style! Watch the epic video below.