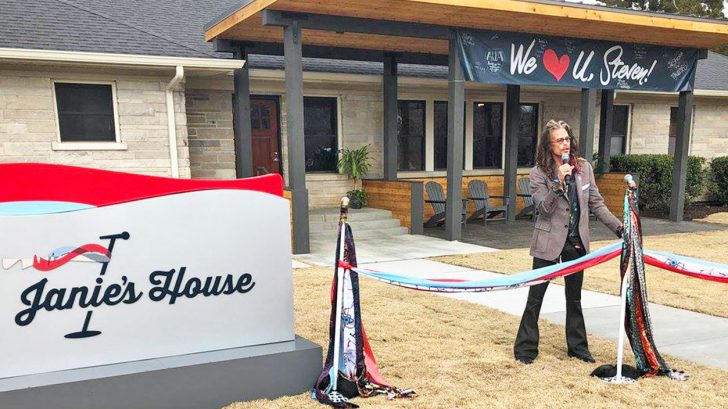 Almost 30 years ago, rock star, Steven Tyler co-wrote the song “Janie’s Got a Gun.” With hopes of reaching an audience of young women who needed help, the song spoke volumes. Now, his most recent act has left fans in awe over his courageous behavior.

Aerosmith’s frontman just announced his opening of Janie’s House – a home for abused and neglected girls. The safe home is located just outside of Memphis on the Youth Villages Barlett Campus. Aside from the big opening, Tyler also donated $500,000 for renovations of the 82-acre home.

Janie’s House was named after Aerosmith’s 1989 hit song, “Janie’s Got a Gun.” The song tells the story of a girl who was sexually abused by her father for many years. The young girl gains the courage to kill her father after all her suffering. The heartwrenching music video brings the song to life.

The inspiration behind “Janie’s Got a Gun” stemmed from Tyler’s time spent in a treatment center. The singer was checked into a program while dealing with his own addiction problems. During his time, he met several young women who had been both emotionally and physically abused. Doing what he could at the time to help – Tyler put his heart into writing their story. As his emotions poured into the song, he supported these young women one verse at a time.

Tyler’s hope for Janie’s House is that it will bring awareness to the issue surrounding neglect and abuse. Following the abuse and trauma that these young women have experienced, the home will generate services and financial support to effectively get the girls back on their feet. The home can foster 14 girls at a time with no limitations on stay time.

In 2015, Tyler launched his fund, called Janie’s Fund, in hopes to raise awareness and money for young women who had suffered sexual abuse. Since its opening, the fund has raised $4 million.

You can watch Steven Tyler’s “scarf-cutting” ceremony on Janie’s House opening day and his speech below.