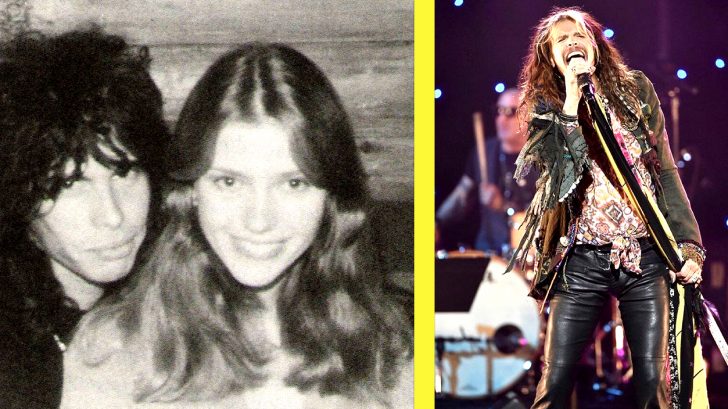 The 70s were a wild time in the world. And that is especially true for rock icon Steven Tyler.

Known for his legacy of hit songs as the lead singer of Aerosmith, Steven Tyler has been a famous musician for nearly 50 years. The now 71-year-old has literally done it all throughout his years as a traveling rock star – and now, he even has started his own career as a country music singer with hit songs like “Love is Your Name” and “Red, White & You.”

Beyond just music and adventuring across the world, Steven Tyler has also been blessed with four beautiful children…but one of them was kept in the dark for a long time.

Back in the 1970s, Playboy was big and so were the Playmate girls who ran around Hugh Hefner’s mansion in California. Rock stars often came to visit and there was no shortage of fun, drinks, and incredible music.

Happy Birthday ??? @rickderringerofficial … such a huge part of my youth and it was Rick and his former wife Liz that properly introduced me to @iamstevent … the rest is history! Thank you for that introduction because it gave me my angel ? @misslivalittle ?❤️?#bebebuell @dickwingate #lizderringer

One of the girls, Bebe Buell, got along famously with Steven. They had a fling and then both went their separate ways. Not much later, she gave birth to a young daughter and her longtime off-and-on boyfriend Todd Rundgren was listed as the father on the birth certificate.

For the next decade or so, Bebe Buell’s young daughter believed that Rundgren was her father. She even took his last name.

Sometime around age eight, she went to a concert Rundgren was performing at and first met Steven Tyler when he bumped into her parents. They all seemed chummy, and the young girl immediately was enamored with Steven.

“Todd basically decided when I was born that I needed a father so he signed my birth certificate,” the daughter said in a 2011 Wonderland interview. “He knew that there was a chance that I might not be his but…”

“I was watching Todd [Rundgren] play and I was like, ‘Ugh, I don’t wanna come!’ And she pointed to this guy standing at the bar and I was like, ‘Is that Mick Jagger’s son?’ And he bought me a Shirley Temple,” she added. “I fell madly in love with him. I had no idea who he was.”

For the next three years, the young girl had no idea she had just met her real, biological father – and her mother kept it from her because she was concerned with Steven’s ability to rear a child. You know, because of that hardcore rock and roll lifestyle.

So, who is this young secret child? Well, she was born Liv Rundgren – but now, she’s known as Liv Tyler.

SO PROUD OF MY BEAUTIFUL GIRL @misslivalittle…SHE CONSTANTLY AMAZES ME…WHAT A FABULOUS DEBUT ON @harlotsonhulu…LOVE YOU SO MUCH… ????♥️

A world-class actress and silver screen superstar, Liv Tyler has made a name for herself through hard work and incredible talent. She’s appeared on projects like Lord Of The Rings, Armageddon, Jersey Girl, and most recently, Harlots.

“I didn’t read much as a kid. Strangely enough, when I first met my dad [Aerosmith singer Steven Tyler], I didn’t know he was my dad and I fell in love with him. I put his poster on my wall,” Liv Tyler explained to Interview magazine in 1997. “I would talk to him on the wall … My mom has a diary entry or something where I wrote, ‘I think Steven is my father.’ I had the same feelings for Todd [Rundgren, who raised Liv as his daughter].”

“After we met, he, Steven, started calling and we’d go see him. He was just out of rehab, so part of going through those steps is making amends by reaching out to my mom after years of being a drug addict and not ever being there. He’d never met me before.”

Both Liv Tyler and Steven Tyler have had to work hard to mend their relationship and get to a good place. Now, they seem completely inseparable and share many adorable daddy/daughter photos together while celebrating each other’s successes!