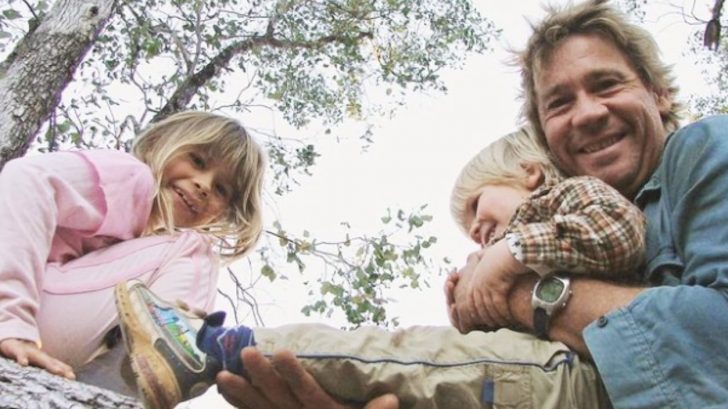 Steve and his wife, Terri, shared two children, daughter Bindi and son Robert. Bindi was eight years old when her father passed away. Robert was only two.

Today, Bindi is 23 and Robert just turned 18. Bindi is now a parent herself…she and her husband Chandler Powell have a daughter named Grace.

Grace’s middle names are Warrior Irwin in honor of Steve. The “Warrior” part of her name is a reference to the nickname Steve gave himself and those who promote conservation efforts…”Wildlife Warriors.”

Steve would have celebrated his 60th birthday on Tuesday (February 22). His children took to social media to pay tribute to him that day.

Bindi posted a photo of her and her dad along with her message. The picture shows Bindi looking on in wonder while her dad held up a small snake for them to admire:

“Happy Birthday to the greatest dad and Wildlife Warrior,” Bindi wrote in the photo’s caption. “Today I’ll watch ‘The Crocodile Hunter’ with Grace Warrior and share stories about her incredible Grandpa Crocodile. I love you with all my heart. Your legacy lives on.”

Robert posted a picture of him riding with his dad on his beloved motorbike. Robert has since inherited the motorbike, and pledged to take it on a ride that day in his father’s honor:

“Happy birthday Dad. I love you and I miss you more every single day,” Robert wrote. “My earliest memories are my fondest, thanks to you. Hanging on tight to the handlebars of the motorbike, when you’d take Bindi and I on your morning lap of the zoo – before going to get ice cream for breakfast. Every minute spent with you was a blessing. I’m gonna ride that lap on your old motorbike this afternoon.”

Bindi and Robert will always treasure the memories they made with their father during his short time on this Earth. It’s obvious how much they miss him.

If Steve was still here today, there’s no doubt he’d be proud of who Bindi and Robert have become.