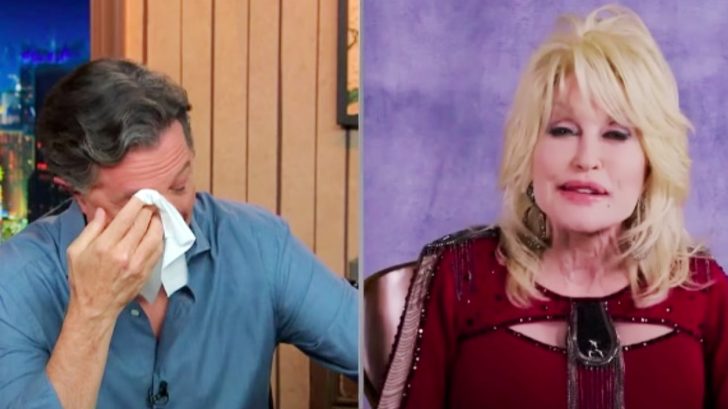 Dolly Parton appeared on The Late Show with Stephen Colbert to talk about her new book, Songteller. The book contains stories about how she wrote some of her most beloved songs, and what she was feeling at the time she wrote them.

Colbert asked Parton to explain the book’s title, wondering why she didn’t call it “songwriter” or “storyteller,” but rather, combined the two words to create Songteller:

“I really think of myself as a songteller, because I write songs, but I tell stories,” she said.

Colbert went on to ask Parton about her mother, Avie Lee, who shared many story-based songs with her when she was a child. Parton said her mother was a good singer, and that she would sing “all the time.”

One sad song her mother used to see was the old folk and bluegrass staple “Bury Me Beneath the Willow.”

The song tells the story about a woman who was going to be married, but her groom-to-be broke her heart. She passes away, and sings of wanting to be buried under the weeping willow tree, where perhaps her lover will weep over her passing.

Parton then sang pieces of the song for Colbert, and he had instant goosebumps. As she continued, he found himself unable to control his emotions, and started crying.

He could be seen wiping away tears with a tissue, so Parton decided to stop singing before he got too overwhelmed:

“So I better hush before you cry yourself to death and you can’t finish the show,” she joked.

Colbert laughed, saying he just couldn’t help it because of how “beautiful” Parton’s performance was.

You can witness it yourself by watching the video below. Parton starts talking about the song around the 5:04 mark. Or watch the whole clip to learn more about Songteller and Parton’s love for music.

Like Colbert, you too may find yourself with tears in your eyes after hearing Parton sing “Bury Me Beneath the Willow.”