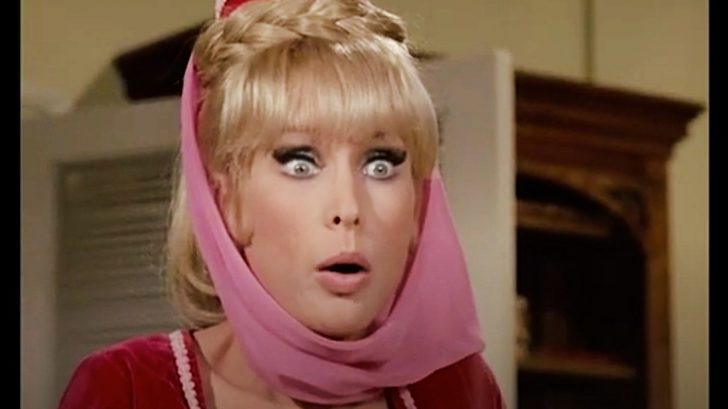 One of the most-famous sitcoms in television history, I Dream of Jeannie, starred legendary actress Barbara Eden and Larry Hagman as the two lead characters in the show: Eden as the effervescent and bubbly-pink Jeannie and Hagman as Major Tony Nelson, who fell in love with her.

While Eden and Hagman worked together and she admired his acting abilities and his genuine caring nature, there were moments of intense tension and disturbing behavior on his part that affected everyone on set.

In an excerpt from her 2012 memoir, Jeannie Out of the Bottle, Eden detailed her admiration for Hagman, professionally, but also revealed the shocking reason that production had to formally ban all visitors from the set…forever.

“I want to make it crystal clear that I think Larry Hagman is a terrific actor and I’d work with him again any day,” she said, according to Showbiz CheatSheet. “Not just because of his talent but because he is a warm and kind human being.”

That being said, she explains that Hagman was fairly open about his vices and sometimes would partake in them close enough to filming that it caused friction with the production of the show.

“Larry himself has made no secret about the fact that he was taking drugs and drinking too much through many of the I Dream of Jeannie years. And that he has regrets about how that impacted him. And I, of all people, know that I can’t afford to be judgmental about the lure of drugs and the dreadful repercussions of taking them.”

It was during a time when Hagman was suspected to be under the influence that Eden considers to be “one of my more startling memories of Larry.”

A group of nuns was on the production lot taking a tour of The Flying Nun while Jeannie was filming one stage over. They were then invited to visit the Jeannie set as well.

“So here they are, about ten of them…Sweet, gentle, and demure in their black-and-white habits, their hands folded, their eyes bright with anticipation at the thought of visiting another Hollywood set and meeting all of us.”

But that’s where the story took a very dark turn…

“Larry takes one look at the nuns, grabs an axe … and swings it around his head so ferociously that he could easily have killed someone,” Eden continued. “As he swings it, he lets out a torrent that includes every single foul swear word I’ve ever heard, and some I haven’t—right in the stunned nuns’ faces.”

“He starts hacking at the cables frenetically until someone grabs the axe, frogmarches Larry off the set, then escorts the shaken nuns out of the building,” Eden wrote. “It’s hardly surprising that no visitors were ever allowed on the I Dream of Jeannie set again.”

That single incident caused such a problem that executive producer and creator of the show, Sidney Sheldon, pushed for Hagman to get professional help…however, Eden says, “Larry’s dramatics escalated.”