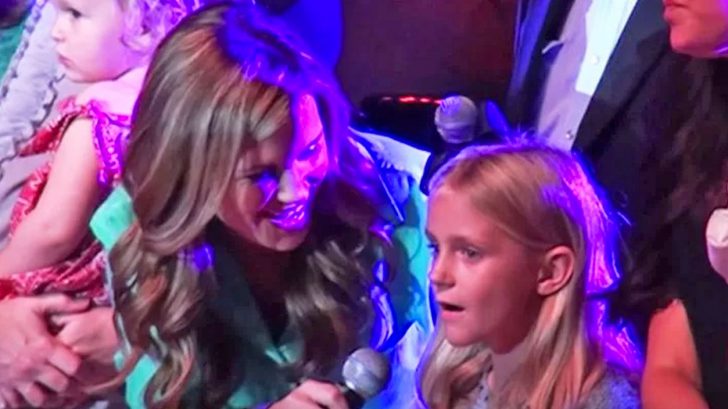 At the 9th Annual Leadership Music Dale Franklin Awards, a variety of music legends and stars experienced an incredibly unexpected, but outrageously moving, solo with the least likely of singers.

The audience was decorated with members such as Alabama‘s Randy Owen and country music icon Vince Gill, both avidly involved celebrities with a known history of assisting St. Jude in raising funds.

A single microphone was being held by a woman accompanying the children onstage, who quickly noticed one little girl, in particular, singing her heart out to the song’s chorus.

The woman passed the microphone down until it was slowly placed before Ally Cameron, the young singer whose cancer had reached remission and who had so boldly been singing at the top of her lungs.

As the mic made its way to reach her sweet voice, the little girl, out of shyness, pulled back and initially shook her head. However, it only took a mere second of convincing before this adorable little girl was singing directly, melting the hearts of the everyone in the audience.

Ally received a warm applause from the inspired crowd and, when the chorus repeated, she continued to pour her heart into the song. She received a large applause from her friends on stage, as well as the emotional audience who gave this incredible little girl a well-deserved standing ovation!

Be sure to check out the beautiful moment below!