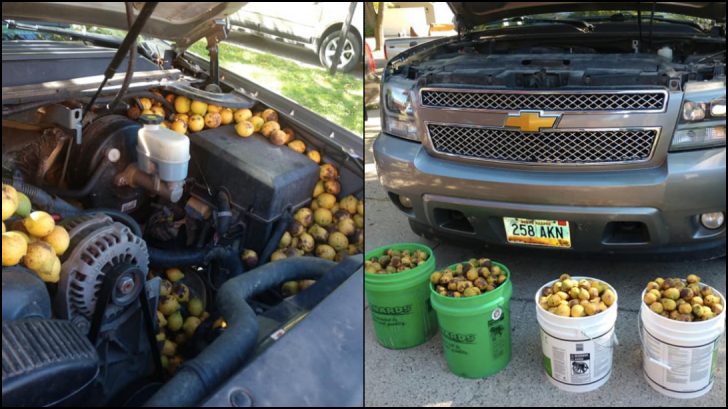 Squirrels are known for foraging and storing up food for cold months, but a North Dakota squirrel has taken his habit to an all new level by hiding ridiculous amounts of walnuts in a Chevy Avalanche.

Bill Fischer, of Faro, North Dakota, recently returned home from a four-day work trip to find yellow-husked black walnuts stuffed into every nook and cranny under the hood of his truck. They were crammed behind the fenders, packed between engine parts and piled in nearly every possible spot of the trucks front end.

56-year-old Fischer was somewhat prepared for the discovery as it has happened every two years since 2013 due to the tree’s maturation cycle.

“I’ve got other vehicles that sit very close to that tree, and it’s always my truck,” Fischer told The Washington Post. “I’ve even parked purposely out on the street, as far away as I can from the walnut tree, and they still go find the Avalanche and hide them in there.”

What Fischer wasn’t prepared for, however, was the quantity of walnuts the squirrel foraged this year. The most Fischer has ever had to dig out of his truck in the past was four or five six-gallon buckets. This year the critter managed to pilfer 7 full buckets worth. Five of those buckets came from the hood alone. Another two buckets full were found behind the truck’s fenders.

Just as he’s done in past years, Fischer posted the walnuts on Facebook, offering them to anyone willing to take them off his hands. See photos of the determined squirrel’s hard work below.