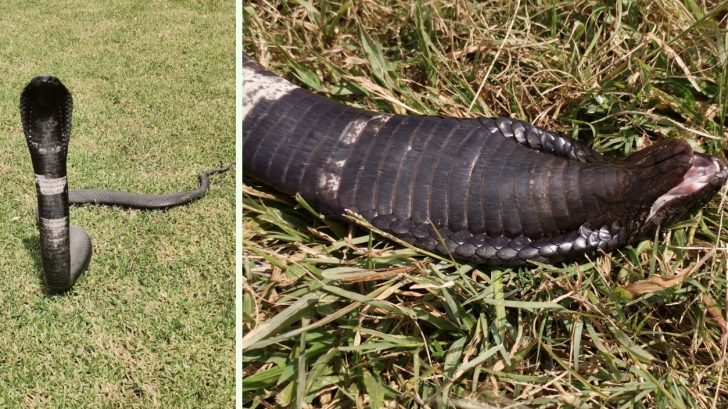 Netcare 911, an emergency rescue service located in South Africa released a public statement on Facebook about capturing multiple venomous snakes that were pretending to play dead to avoid getting captured.

Netcare 911 paramedic Nick van der Walt, a professional snake handler was called to the Vanderbijl Park and Midvaal areas to hunt down and capture the cunning creatures.

“After multiple days of captures in the extreme heat, all Nick’s rescues were Rinkhals snakes (Hemachatus haemachatus),” Netcare 911 wrote on Facebook

The snakes are known as Rinkhals, or more scientifically known as, the Hemachatus haemachatus, and their secret technique to staying alive is turning over on their backs with their bellies up and mouths open pretending they’re dead.

The snakes do this in hopes that predators will not see them as a threat and will leave them alone. However, if a predator doesn’t, the snake has another special ability in its line of defense.

If the enemy gets too close to the snake while they’re playing dead, it will spring back up and spit a toxic venom from up to seven feet away at the enemy’s eyes.

Rinkhals have extremely good aim and if their venom gets into your eyes it’s very painful and can cause swelling, bruising, drowsiness, nausea, vomiting, violent abdominal pain, cramps, and even vertigo can occur.

Fortunately, Nick was able to capture all the snakes in the area and didn’t suffer any pain from being spit on. All of the snakes were transported to a suitable area and released back into their natural habitats.

Netcare 911 shared multiple photos of the snakes, either playing dead or raising their head high into the air to show off their flattened-out cobra heads.

See Footage Of Another Rinkhals Spitting Its Venom Below