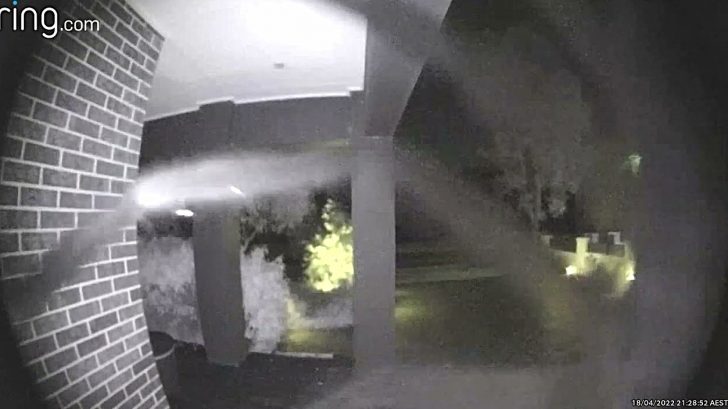 Evan Smith from Sydney, Australia captured a wild video of a massive eight-legged creature crawling across the lens of his front door RING security camera.

The footage starts off showing Evan’s front yard and empty driveway with it being pitch black outside and just a few lights illuminating the property.

The video just shows the empty driveway for a few seconds, but then, all of a sudden, you can see these big spider legs crawling onto the lens.

The spider then brings its butt into view and sits directly over the RING camera. The spider sits there for a while not moving a muscle, but then it starts to fidget with its legs.

At one point, the spider even appears to be tasting the camera lens because it takes its two front legs and touches the lens several times before putting the legs in its mouth.

“The footage was a little funny. Not too scared by it but I was wondering why I was getting so many motion alerts on my phone,” Evan told Newsweek.

Towards the end of the video, the Australian arachnid even looked directly at the camera with its eyes as it was trying to peer in and see what the strange object was.

House has been torched, homeless now

Wildlife experts say that Australia is home to 10,000 different species of spiders, however, it is not clear what the exact species of the spider in the video was.

Evan said he lives near a native bushland, so spiders are not uncommon in the area. “I keep honey bees and native bees in my backyard so I try not to spray any insecticides around outside,” he said.

They did say that due to the country’s warm temperatures and conducive environment, spiders are able to grow to very large sizes. Fortunately, it’s the tail end of “spider season” in Australia, which goes from November to April, and spider activity is expected to slow down.

“We get golden orb weavers, huntsman, St. Andrew’s Cross spiders a fair bit. They are all fairly harmless so happy to let them be outside. If any make a web in a bad spot I just keep knocking the web down each night so they go somewhere else,” he said.

Watch Footage Of The Spider Below