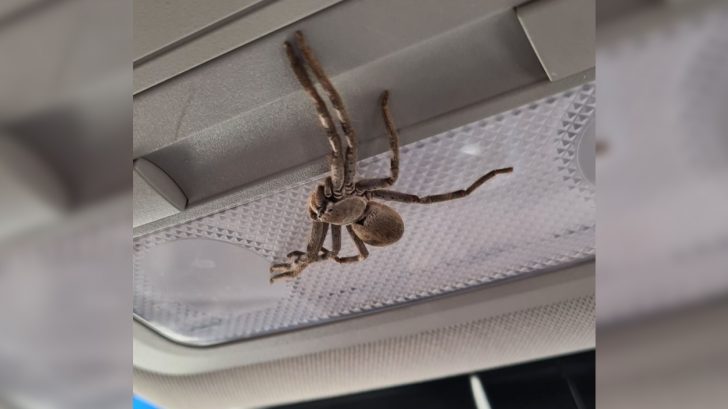 Monique Fogarty from Australia said she was driving 60mph down a highway when a huntsman spider “almost killed” her.

Ok, she may have been exaggerating on the “almost killed” part but going that fast down the highway and getting scared by a big spider could have certainly ended that way. Fortunately, once she realized exactly what it was and that it wasn’t venomous, she wasn’t so afraid.

“I squealed as it gave me a fright when it came out of nowhere but after the initial fright I was calm and unbothered. I know huntsman spiders aren’t harmful and that it wouldn’t do anything until I could pull over safely,” she told Daily Mail Australia.

The Australian local said she was on Tuggeranong Parkway when the incident occurred. The spider was hiding behind her rearview mirror positioned just above her head before it crawled out to reveal itself.

After her initial squeal, Monique slowed the vehicle down as best she could and pulled over to the side of the road. Once she reached a complete stop, she cupped the huntsman in her hand and gently tossed it out the car door onto the ground.

“I had seen the huntsman on my car a few times over the past few months but it always managed to hide away again before I could shoo it off. Once before, it was likely the same spider and my daughter saw it sitting next to the front passenger seat window. That time I just put the window down and shooed it out then put the window back up.”

She took a photo of the spider on the ceiling right before she tossed it out of the car and shared that photo on the ‘Australian spider identification page‘ on Facebook.

Go ahead now and check out the video below on why huntsman spiders are actually good to have around.