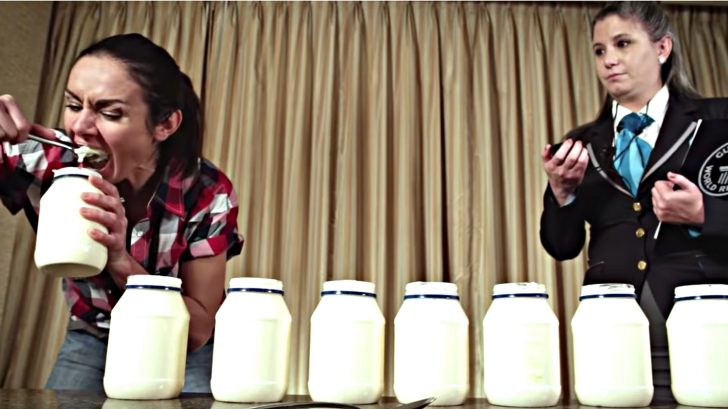 Mayo. It goes on sandwiches. You use it to help make baked chicken crispy. It can be a great base for a veggie or chip dip. It helps make tuna salad or egg salad taste all sorts of yummy. It has literally an endless number of uses.

But, what you don’t do with mayo is eat it by the spoonful straight out of the jar.

However, this lady did that. And I can barely keep my lunch down as I type.

According to the official Guinness Book Of World Records YouTube channel, a speed-eating champ named Michelle Lesco set out to break the world’s record on two separate occasions.

One for the fastest time to eat a hot dog without using her hands and a second for the most mayonnaise eaten in three minutes. She completed the first by devouring the hotdog in 21.60 seconds…and definitely took home the trophy for the second – which was an astounding 86.35 oz of mayo (3.5 jars.)

Congratulations to Michelle on this truly one-of-a-kind feat!

When news broke of this recent victory by the speed-eater, Twitter had a lot to say about it.

Who at one point was like "you know what world record needs to be set? Eating mayo"

And worse, on a later date, someone else was like "you know what? I wanna break the mayo eating record" and they did pic.twitter.com/bWI3bM83iv

sometimes i feel like going on facebook then i run into a video of a woman eating 16,000 calories of mayo and decide to delete my account instead pic.twitter.com/dXPEquG1BQ

Scrolling, I saw a video of someone eating jarS (plural) of mayo, trying to break some record, so now I have to get off the internet forever. Goodbye everyone, we had a good run, I’ll miss you. ?????? pic.twitter.com/v9vgaxuTGU

Check out the full video (including the hotdog portion) below courtesy of Guinness World Records.