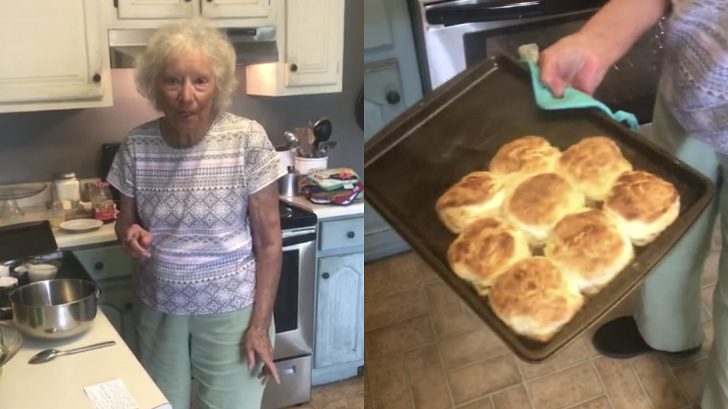 Pat Wilbanks, an adorable grandmother from LaFayette, Georgia, became an internet star after sharing a video of herself making biscuits. The three-part video was made at the request of Wilbanks’ best friend’s granddaughter, and she never expected the attention that she received when the tutorial went viral.

Like any true southern biscuit connoisseur, Wilbanks never measured the ingredients for the dish, instead “eyeballing” it and preparing the biscuit dough based on touch and feel that only comes with years of experience. But, the method proved to be a challenge when it came time to share her recipe.

Wilbanks enlisted the help of her grandson, Chris, who helped measure all of the ingredients and wrote down the method. Chris also got behind the camera to film his grandmother preparing a batch of the tasty quick bread. The result was a moment that took us all back to our childhoods and memories of our mothers and grandmothers baking biscuits.

The simple recipe almost seems too good to be true, thanks to Pat’s easy instructions. Pat not only talk the viewers through the process, but adorably gives her opinion on the “dos and don’ts” of biscuit making. “You can use margarine. I don’t recommend it. Just use the real stuff,” Wilbanks suggests.

Wilbanks said she learned how to make biscuits, and many other dishes, from her husband’s grandmother, Rose Hawkins, who was born in 1886. Wilbanks told TODAY she was 12-years-old when first she started baking biscuits. After losing her mother when she was only 11, Wilbanks helped to feed her six siblings by cooking on a wood stove in a home with no running water.

The recipe yields 8 biscuits and only requires four ingredients! Check out the videos below then scroll down for the full recipe.

Here’s my recipe, hope it helps you!For media use contact us via messenger

Spread 1/3 cup flour on pan or on the counter. Mix remaingin 1 1/2 cup flour, Crisco and buttermilk together in a bowl. Put dough on flour in pan. Knead until not sticky. Cut out biscuits. Bake for 13 minutes. Turn on broiler and broil for 2-3 minutes.