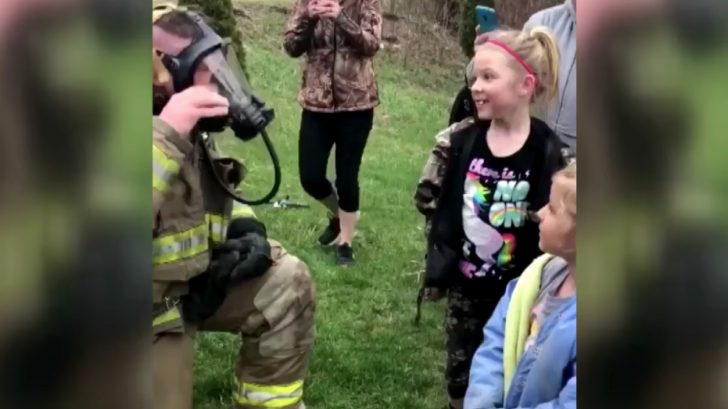 After being away from his beloved little girls and wife to serve his country in the National Guard, Sgt. First Class Terry Gottke came up with an epic plan for a homecoming surprise his kids will never forget!

Gottke and his wife, Brittany are both firefighters in Blue Rock, Ohio. Gottke has served in the National Guard for 14 years and his last deployment before this was in 2010 to Iraq. Just nine weeks after his second daughter was born.

On the Saturday before Easter in 2018, Brittany Gottke and her husband devised a plan to surprise the girls with their father’s return following a year-long tour of duty in Afghanistan.

Brittany had already greeted her husband when he first had arrived back into town earlier that day. Together, they decided to have him show up in full-blown firefighting gear and have the folks from his station drive him home on the fire truck to keep it going as long as possible.

The fire truck roared down the road with sirens blazing and all the adults acted shocked asking the little girls if they did something to get the firefighters called on them.

Stunned, Gottke’s daughters, Tawny and Brea, both looked shocked when the fire truck stopped in front of their house, lights still going.

Gottke stepped out of the vehicle dressed in full-on gear with mask and all so that the girls wouldn’t recognize who he was until he took it off.

As he approached them, they started to sense something was up and they started to smile. Watching him take off his mask and headgear first, the smiles turned into emotional tears of joy as they felt an overwhelming sense of relief to have their daddy back home.

Little Tawney and Brea both immediately jumped to hug their dad and Tawney would not let go of him!

Now that Gottke is back home, he was with his family for a month before continuing to serve stateside.

We were just contacted by ABC news. the home coming video with terry and the girls will be on good morning America tomorrow morning!! ❤️???

That same weekend, the entire town welcomed Gottke home and thanked him for his service. Supporters were coming out in droves and filled the streets where they even had a special traffic sign dedicated to him with his firefighter number and name – all to show him how much they appreciated his service.

The little girls, who both have said they want to be firefighters like their parents, truly could not have asked for a better surprise!

Watch this heartwarming video of a family reunion after a long year apart!