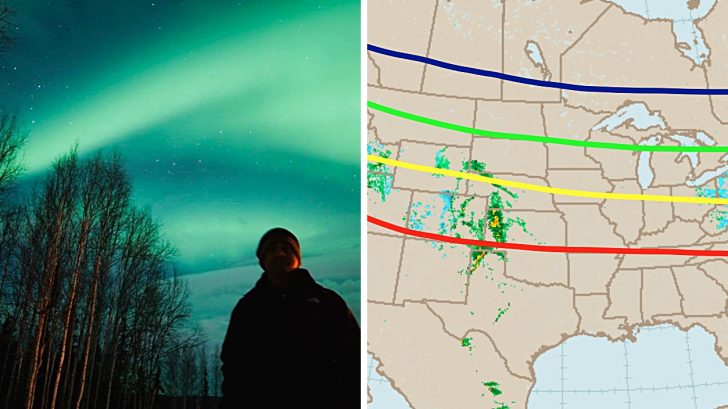 One of the world’s foremost bodies of scientific experts has issued an alert for an upcoming solar event that will cascade across the sky throughout North America. Not your traditional solar flare, this rare geomagnetic storm is something that will be much prettier to observe – and won’t cause interference in the gadgets we all know and love.

The last one I promise. This chameleon tail was sooo unusual to appear. Postpone your aurora hunting for the October as now it’s basically over . #aurora #norway #tromso #pukkatravels #geomagneticstorm #boooom #arctic

The National Oceanic and Atmospheric Administration issued an alert for a “moderate” geomagnetic storm to occur on March 23, 2019, due to the arrival of an anticipated CME (coronal mass ejection).

This agency posted a map along with several photos of the predicted event on their official website. Alongside the images, they explained that this event is the result of an “asymmetric halo CME” that is partially directed at Earth.

“The largest storms that result from these conditions are associated with solar coronal mass ejections where a billion tons or so of plasma from the sun, with its embedded magnetic field, arrives at Earth,” NOAA writes.“CMEs typically take several days to arrive at Earth, but have been observed, for some of the most intense storms, to arrive in as short as 18 hours.”

A preceding solar flare from a sunspot had affected radio operations in Africa and Europe earlier this week, and the ensuing CME will be able to be seen by millions across the globe – but only in specific areas.

One of the very worst solar storms in recorded history happened in 1859 and is known as The Carrington Event – after the scientist who observed it and made correlations to the effect it had on the world.

During that extra rare event, CNET reports, many people saw the actual telegraph wires explode into flames and if that same thing were to happen today – humanity could be affected in disastrous ways.

Both CMEs and solar flares involve large explosions from the sun and outward bursts of energy that leave the sun and come shooting toward passing planets – like Earth.

With this specific CME, it’s expected that the Northern Lights will be visible as far south as the southern point of Iowa with more than 14 other states also able to witness this unique solar event.

The map above depicts where NOAA expects folks to witness these beautiful lights dancing across the sky and it will fall between the green and yellow lines. This swath of land includes states like Maine, Vermont, New Hampshire, Massachusetts, Minnesota, Wisconsin, New York, Illinois, Montana, Idaho, both North and South Dakota, plus other parts of the United States.

Every single year, millions of people travel to parts of the globe closest to the North Pole in hopes of witnessing the Aurora Borealis (Northern Lights) – but this weekend you might be able to see it right in your backyard!

Check out NASA’s cool video about Solar Flares and CMEs below and let us know if you’ll be heading outdoors for this solar event in the comments below.