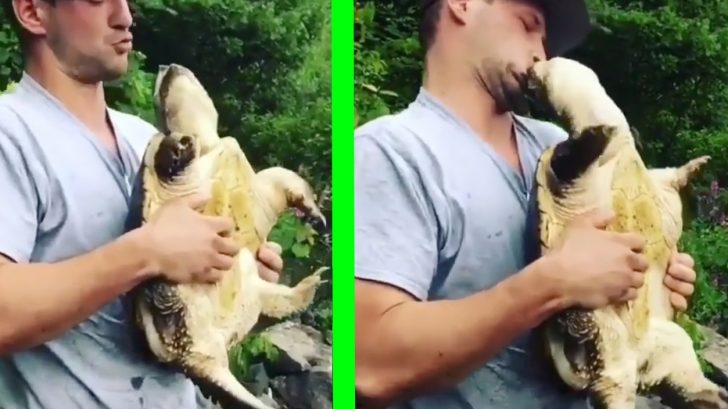 On Thursday, August 30th, 2018, Michael Ganley from Woburn, Massachusetts filmed a slow-motion video of a snapping turtle they caught in the river biting his friend in the face.

News Flare reported that Michael said he was hanging out with this friend, Victor Sanchez, at a local fishing spot, fishing for largemouth bass with big artificial fishing lures. It was hard to catch fish due to two massive snapping turtles hanging out near the fishing spot.

Michael told the outlet that he had his phone out filming slow-motion videos of the turtles when his friend Matt Trabucco who happened to be walking around the pond saw the fellas fishing and walked over. He asked Michael if he could catch a turtle for him, in which Michael replied, “of course, they’ll eat anything.”

Michael took a fishing hook that he used earlier to catch a small sunfish and cut the barbs off of it. He dangled it in front of one of the turtles and it took the bait. The moment he caught it, to his surprise, Matt grabbed the line and started pulling it in himself.

At this point, Michael reached over and grab his phone that was already out from when he was filming slow-motion videos and quickly pressed record right when Matt was picking the turtle up to get a better look at it.

Matt was a little too careless, though, because he leaned in to give the turtle a kiss and the turtle with its jaws already wide open, lunged at Matt and bit him directly on the upper lip. Luckily, the snapper let go and he got off with a warning of what could happen if he gets his face too close again. The turtle could have easily chomped a piece of Matt’s face off.

Watch Turtle Bite Man In The Face In The Video Below