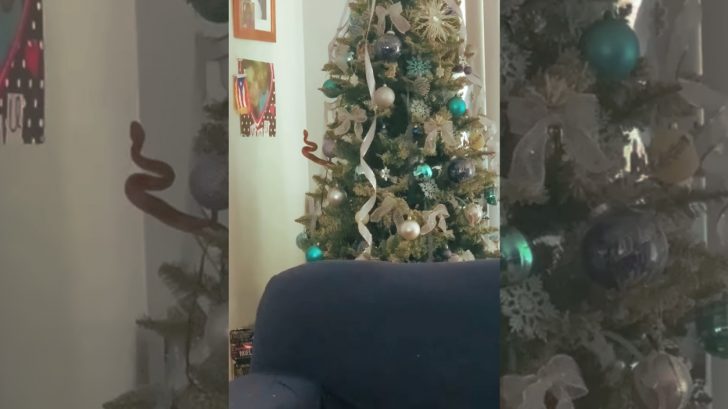 FOX 13’s Paul Dellegatto shared a creepy Christmas video on Facebook showing a snake holding half or less of its body out of a Christmas tree.

The tree wasn’t outside either, it was inside the house. The horrified homeowner took a video of the snake from a safe distance in the living room and the video somehow ended up in Dellegatto’s possession.

The snake had climbed halfway up the beautifully decorated tree before it began poking its head out to get a better view of its surroundings. There was a picture on the wall near the tree and it’s almost as if it was trying to get a better look at it.

It was a rat snake, according to snake experts commenting on the post. Wildlife removal expert Mike Spanola from Tampa Animal Control also added that this wasn’t the first snake that had to be removed from a Christmas tree this year.

“More common than you think. We removed one from a customer’s tree just a few weeks ago. Fake tree, stored in attic. Customer had the snake living in her tree in her attic eating…..rats,” Spanola wrote on Twitter.

When you live in snake country, there’s no telling what you’ll find in your Christmas tree so be careful out there everybody. Go ahead now and take a look at the snake video below.