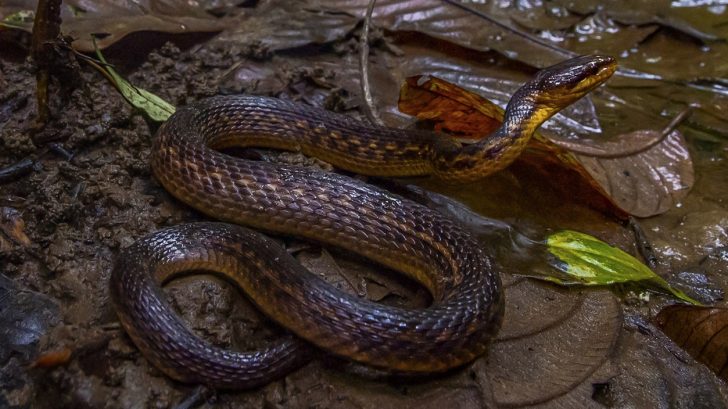 Assam keelback snake, a non-venomous snake, is back after being lost for nearly 129 years!

Rediscovery of Assam Keelback, Hebius pealii (Sclater, 1891) after 129 years
We found this snake at Poba reserve Arunachal Pradesh during our Abor Expedition in 2018. Thanks to all our team members specially to Dr Abhijit Das for finding this. Check – https://t.co/c25fjCivzx pic.twitter.com/OtHxM8EF2R

The Assam snake species is small — about 60 cm long, brownish, with a patterned belly. It was first seen in 1891 when a British tea-planter Samuel Edward Peal collected two male specimens from Sibsagar in Assam.

According to CivilDaily, the snake’s ‘lost’ status has a lot to do with the habitat it occupies — in this case, a lowland evergreen forest. These forests have been selectively degraded during the last 100 years due to tea plantations, habitation, agriculture, and many other activities like oil exploration and coal mining.

In September 2018, the snake was accidentally found in a reserve forest by a team of researchers from WII, exactly 118km from the place where it was first collected on the Assam-Arunachal Pradesh border. The team was retracing the steps of the Abor Expedition, a military expedition by the British against Abors in 1911, where British soldiers had killed several people belonging to the Abor community as a revenge for killing an officer.

The find was published on June 26, 2020, in Vertebrate Zoology, an international journal published from Germany.

“To commemorate the Abor Expedition, which besides being a military campaign had resulted in the collection of a large number of animals and plants, we revisited the area to find out the changes that had occurred in a century,” Abhijit Das, a scientist in endangered species management department of WII, said to Hindustan Times.

“Since the British started their expedition from Dibrugarh in Assam from a place near Poba reserve forest on the Assam-Arunachal Pradesh border, we also began there. It was in a marshy wetland inside the forest, where I encountered this snake endemic to Assam and not seen for the last 129 years. It was totally unexpected as people had thought it to be extinct,” he added.

The team of researchers contacted the Natural History Museum in London to confirm the snake species as compared to the original specimen collected in the past by Samuel Edward Peal.