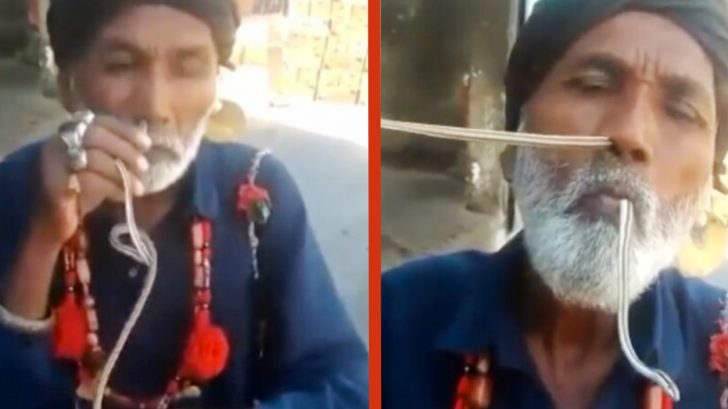 A famous actor from India, Vidyut Jammwal, was walking through his home country recently when he filmed a native inserting a snake into their nose and then letting it slither out of their mouth.

He shared the video to his Instagram and within days it received millions of views. He captioned it, “I love My India.”

Definitely an unusual scene to see in person, it appears the snake was not hurt during the making of the video, neither was the man. In fact, he actually looked like this was not his first time sticking a snake up his nose.

He was dressed very well and could have potentially been a street performer. In some parts of India, there is an ancient culture known for being very close to snakes and this man may have been a product of that.

“Many people are scared of snakes,” Rajendran from Southern India told BBC. “But we must remember that the snake is only interested in survival. If we move in agitation, the snake perceives a threat and can strike. If we stand still, however, it will often slither away.”

There are over 350 species of snakes in India and this number is increasing due to new discoveries. Out of all the snakes in the country, only 17% of them are venomous.

Many people in India love snakes so much they live side by side with them and there’s one person you should see. Her name is The Incredible Indian Snake Girl, check her out in the video below.