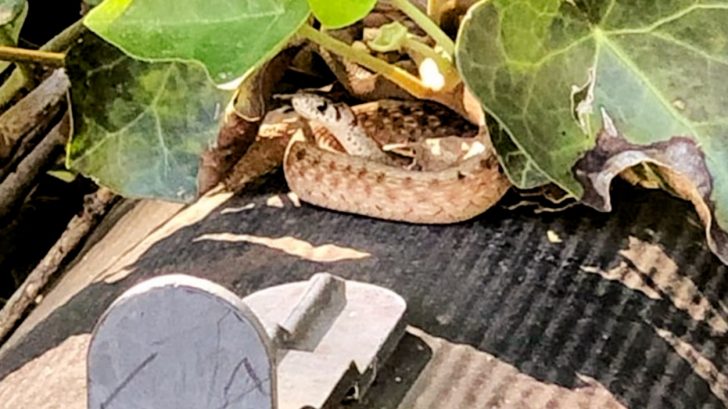 Rain or shine, postal workers are out there on the roads making sure you get your mail and packages. But one mailman in North Carolina refused to make a delivery in 2019 after encountering an unexpected resident at one of his stops.

That unexpected resident wasn’t a person, but rather, a snake that had made itself comfortable on the mailbox of one family’s home in the town of Mint Hill.

According to a post made by the Carolina Waterfowl Rescue, the mailman refused to deliver the mail until the snake left its perch from the top of the mailbox. Can y’all blame him?

Jennifer Gordon, the head of the Carolina Waterfowl Rescue, told The Charolette Observer the family called them to remove the snake from their mailbox. The snake had made itself at home in some ivy below the mailbox, and had slithered on top of it to do a little sunbathing.

Thankfully, the mailbox’s new occupant was never going to put the mailman or the homeowners in any danger. The Carolina Waterfowl Rescue determined the serpent was a Dekay’s Brownsnake, which is non-venomous.

“Most of the time, the snakes are harmless and will move on their own,” Gordon said. “In the Charlotte area, snakes that are found around the home are generally rat snakes or garter snakes. Those are great for pest control and serve a purpose in the ecosystem.”

Venomous or not, commenters on the rescue group’s Facebook post about the snake sympathized with the terrified mailman. Many said they would have reacted the same way if they were in that situation.

The mailman shouldn’t have to worry about the snake in the future. The critter was relocated to a woods by the Carolina Waterfowl Rescue and the family trimmed the ivy from the mailbox to make it less enticing.

At least the snake that the North Carolina mailman encountered wasn’t massive like the one discovered by a postal worker in Overland Park, Kansas in 2018. You can watch a video about that ordeal below!