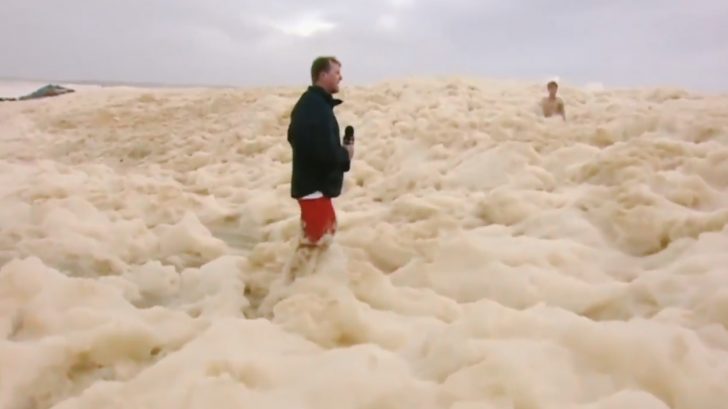 Along several coastline beaches of New South Wales and Queensland, Australia, there have been reports of a recent storm gathering up large amounts of seafoam near the coast.

The foam may look like a magical wonderland full of fun and good times but experts are warning folks not to go playing or exploring in it because there are venomous sea snakes and other dangerous creatures lurking within.

Officials added that there are about 32 different types of sea snakes swimming on the coast of Australia and all of them are venomous. If bitten, it will require antivenom to save the person’s life so it’s best just to stay away from the foam.

Not only that, but experts also warn that the foam is contaminated with pollutants that could be toxic to humans and their pets if gotten on their skin or ingested. On top of that, there are unknown objects like tree branches and other miscellaneous objects that could seriously injure an individual or pet if not careful.

Nathan Fife, the Gold Coast lifesaving services supervisor at Surf Lifesaving Australia, told Guardian Australia, “There’s been trees and things like that have washed up. I think there was half a cow that washed up at the beach yesterday, so please be careful.”

Despite the warnings, there are still a few folks who disregard the message and venture out into the foam. Take a look at some footage of that below.