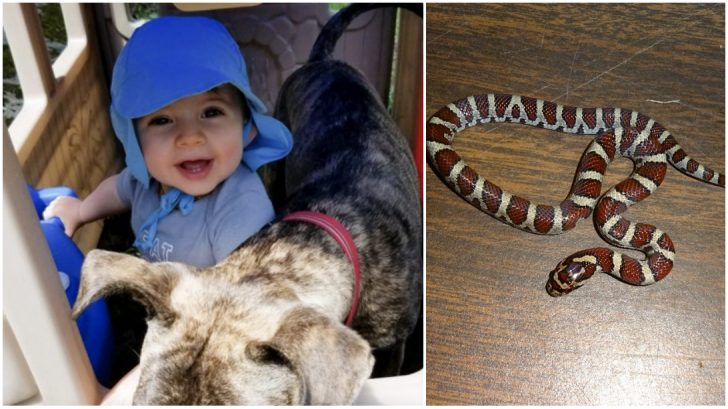 A Massachusetts mom got a shocking surprise when she walked into her kitchen to find her 9-month-old son with an unlikely playmate. A 5-foot-long milk snake had made its way into the family’s Boston-area home. Jenna Lees-Rolfe was washing dishes when she turned around and saw the snake slither out from under the refrigerator and curl up next to the baby.

Lees-Rolfe said she was terrified when she saw the non-venomous snake bite her son’s leg as he played with pots and pans.

“Terrified, I didn’t know if it was poisonous or not so the last thing you want near your child is a snake,” said Lees-Rolfe.

The scared mom took her baby to a family friend who is a doctor to make sure the bite wasn’t venomous.

“He had no signs of any kind of poison his bite had zero inflammation,” Lees-Rolfe said.

Lees-Rolfe and her husband caught the reptile in a trash can before calling local animal control officers. Animal control identified the intruder as a milk snake and told the family that it most likely got in through the garage and worked its way up through the home’s pipes. The snake was then released back into the wild.

Lees-Rolfe told Newsweek she and her husband have now sealed up the gap behind the fridge. They’ve also bought rodent traps and snake repellent “to be safe,” she added.

Mom grew up in snake prone Australia and never saw one in her house, but then she moved to Massachusetts, where a five-footer slithered out from under her fridge and bit her baby. WBZ | CBS Boston: https://trib.al/Nz75OA0

Posted by Morning Express with Robin Meade on Tuesday, June 18, 2019