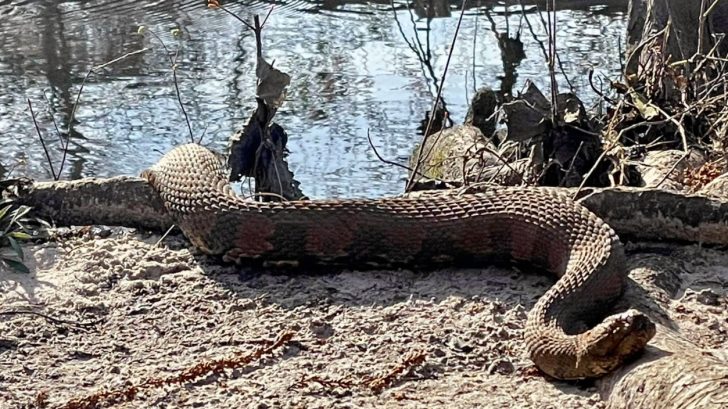 Meredith Langley shared a beastly photo she took during a hike of a large snake blending into its surroundings near a watering hole in South Carolina.

“This guy was huge!” Meredith Langley wrote on Facebook. “Jeffries Creek Park in Florence, SC. Note how well he blends in with his surroundings.”

She stumbled onto the creature while she was out hiking with her children. Instead of panicking, running away, or wanting to kill it like some might – she took this opportunity to let them watch from a safe distance to teach them why it’s important to not run ahead of her when they’re hiking together.

“This was a good teaching opportunity and example for my own kids who forget not to run ahead of me on trails!” she added on Facebook.

Some people in the comments speculated it was a venomous water moccasins snake, but according to the curator of herpetology at the Riverbanks Zoo & Garden, Sean Foley, it was a harmless brown watersnake.

The University of Florida also added that brown watersnakes are often get mixed up with moccasins but there’re ways to tell them apart. Below will break down a few of the differences and a few similarities.

Difference between moccasins and watersnakes:

The similarities are that they:

Watch Video Below To See If You Can Tell The Difference