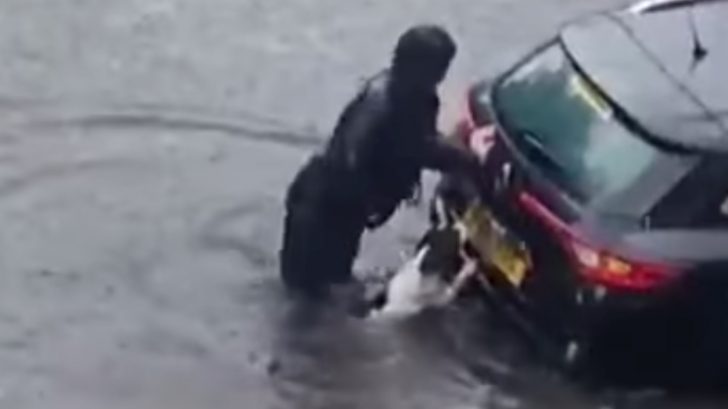 “The girl with the golden touch,” Lori Gillies from Glasgow, Scotland, and her beloved pooch named Puck were filmed by a neighbor pushing a car through a flooded parking lot after a massive downpour in the area.

Photo Of Puck Below

The footage shows Lori pushing the vehicle through tire-high water in a parking lot as she attempts to get it to higher ground.

Puck was playfully swimming around in the water but is right beside Lori when she decides to chip in and help her owner. She put her paws on the back of the vehicle and starts to help push.

“You’ve actually got the dog swimming now, and she’s trying to give it a push,” the man filming the video says. Lori shared the video to her Facebook and in it the man continues commentating as Lori stops pushing to go speak with the driver, “She’s asking ‘is the handbrake off?’ Handbrake’s off and now she’s going to push. What is this? Think it’s a Volkswagen Estate.”

Once Lori is done talking to the driver, she and Puck make their way to the back of the Volkswagen. Lori puts her hands on the back of the car again and Puck places her paws and they get started. With a strong effort from both of them, the car starts to move towards higher ground.

The Volkswagen is finally getting to shallower water where Puck can put her feet on the ground and get better leverage. The man continues to get really excited as he watches and commentates on what a good helper Puck is.

“Oh the dog’s pushing it now. Brilliant. There you go. Wee dog giving it a push. What a dog man. Look at that,” he says in the video.