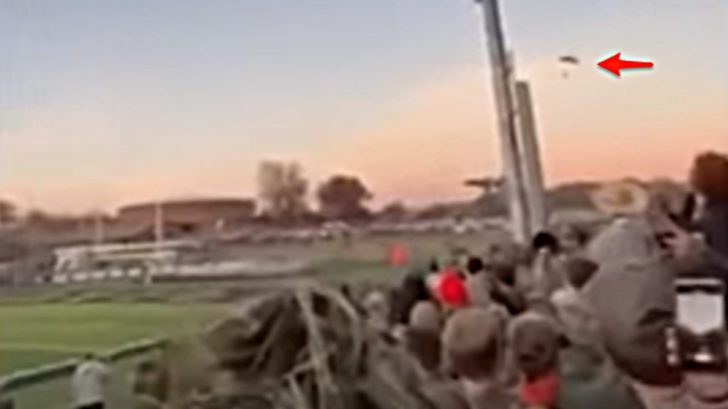 55-year-old Richard Sheffield from Elizabethton, Tennessee sadly passed away on Friday (Oct 21) after sustaining injuries from skydiving and crash landing on the David Crockett High School football field during a pre-game performance.

The incident happened around 6:30pm before the game between Washington County rivals, David Crockett High School and Daniel Boone High School, who were competing in the Musket Bowl.

According to Washington County Schools Superintendent Jerry Boyd, the game was delayed for a while, but officials decided on letting it proceed after Richard was airlifted to the hospital.

The 55-year-old was said to be alive after the crash landing but later died after making it to the hospital. A spokesperson with his employer Jump TN, Angela Alley, said Richard has had more than 1,500 jumps in his lifetime and was an absolute professional.

He is survived by his wife Kim Sheffield, his twin sons Casey and Stacey, and their families.

Richard and Kim would have been married 37 years this year and got together straight out of high school. She along with her sons spoke with News Channel 11 about their beloved family member.

“We just took care of each other and you know, we are just a tight-knit family. The boys, they talked to their dad every day on the way into work in the mornings.”

She went on to say that Richard started skydiving in 1999 on the weekend of Thanksgiving in honor of his dad who was a paratrooper.

“And [Richard] said I wanna jump out of an airplane, you know like dad did and he said I’ve figured out how to do it and I’m gonna go, if you don’t wanna go that’s fine and I said well, I’ll try it,” Kim said.

Fast forward over 20 years later, they both have over 2,500 jumps and their sons followed in their footsteps doing the activity as well. The family said they are comforted knowing that Richard died doing what he loved.

“I think he didn’t want it to end the way it did, but [Richard] went out doing what he loved to do.” Kim told News Channel 11

She wants this to be a reminder to everyone of how short life can be.

“Hug your family tighter today. Don’t take them for granted because they could be gone tomorrow. And it’s one of the toughest things I’ll go through. I don’t think I’ll ever get over it,” Kim said.

Our family suffered a devistating loss last night. My uncle, Richard Sheffield, passed away… doing what he loved. Skydiving into a football game in NE Tennessee. He was a Vol, son, dad, and grandfather. Please share. ??https://t.co/u9QNs6w2DM

Since the interview, a GoFundme page was set up to help the Sheffield family pay for the funeral cost. You can click here to donate to the family if you’d wish.

Interview With The Sheffield Family Below