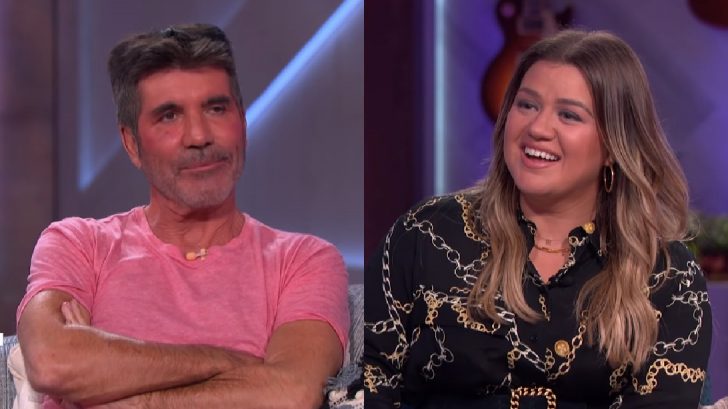 It’s been nearly 20 years since Kelly Clarkson became the first ever American Idol. The singer-turned-talk show host reunited with Simon Cowell this week to reminisce about their time together on the first season of Idol.

Kelly Clarkson was 20 when she auditioned for American Idol, a no-name show that producers hoped would be the next big talent competition. Little did she know when she stepped into the audition room and performed a Madonna tune in front of Simon Cowell, Randy Jackson and Paula Abdul that her life was about to be forever changed.

Kelly went on to win American Idol and maintained a friendship with the judges as her career soared. All three judges appeared on Clarkson’s talk show last season and credited her for Idol‘s success.

“I actually genuinely do not believe we would be sitting here today if you hadn’t entered the show,” Simon said of the American Idol‘s success. “The whole premise of the show was we had to find a star who was gonna sell records…. When you delivered that moment on that first live show, and when you sang that winning song at the end….”

Paula Abdul finished the sentence by calling that moment as “a game-changer.” Randy Jackson added, “And we looked at each other at the end, at the finale and said, ‘Wow, this thing is really gonna work.’ I think that was the moment that we knew.”

Simon Cowell returned to The Kelly Clarkson Show on Wednesday (May 26) where the pair reminisced about their history and Cowell professed his admiration for Clarkson, saying, “You always knew where you wanted to be after the show…the kind of artist you wanted to be. You didn’t need anyone to give you that kind of guidance.”

The former Idol judge went on to praise Clarkson saying, “I genuinely mean this, you are one of the nicest people I’ve ever met. Most loyal, I can say that because we’ve known each other a long time.”

Watch Kelly and Simon’s reunion in the clip below.