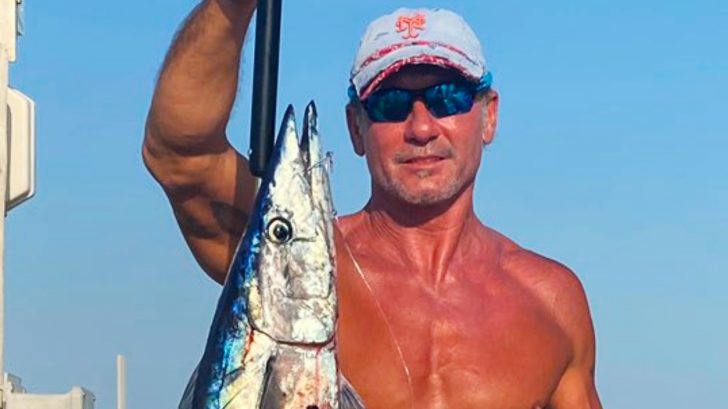 One of country music’s biggest hitmakers from the 1990s is becoming well-known for his impressive commitment to fitness and health alongside his unique hobby of spearfishing. His latest post just goes to show what kind of incredible fish you can score with this specific type of fishing!

Tim McGraw has fallen in love with the art of spearfishing and has shared his journey with fans across social media for years. Just a few days before this big Wahoo catch, McGraw posted a picture of himself and a friend who had caught some hogfish together.

“Pole spear free dive shot at 44 ft down,” he captioned it, stating that they were diving 44 feet underwater in order to spear these magnificent pinkish-colored fish.

He has become somewhat of an Instagram celebrity for his shirtless photos featuring his catch of the day and people seem to love it! One commenter even called out the photo, saying “I don’t think people are looking at the fish.”

Summer is coming!!!!
Can't wait to get under the water! pic.twitter.com/8V8Uzon0Pp

Beyond his spearfishing adventures, Tim has also become a fitness buff and even started up a line of gyms called TruMav Fitness in Nashville.

Check out his big catch of a Wahoo fish in the full post below!

Another great day out on the water… got a wahoo!!!!! pic.twitter.com/xBvlht2MQB