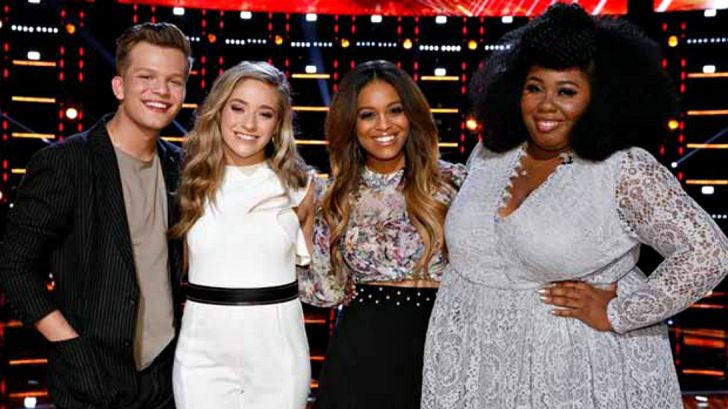 Another season of The Voice is over, but only after an emotional and sometimes surprising ride. Part one of the two-night finale aired on Monday night and gave the 4 finalists a last chance to impress America and earn their votes.

Team Alicia’s Britton Buchanan, Kyla Jade and Spensha Baker of Team Blake, and Team Kelly’s Brynn Cartelli each performed three separate times — one new solo cover, a special duet with their coach and a debut of their first original single. With four flawless performances, it was impossible to predict who the Season 14 winner would be.

With the votes tallied from Monday night, Tuesday’a grand finale was a time for the Top 4 to celebrate their journey and enjoy two hours of star-studded performances from artists such as Jason Aldean, Kane Brown, Ryan Adams, Jennifer Hudson and more. Eventually, the time arrive to announce the winner. It was revealed that 4th place went to Spensha Baker and Kyla Jade came in 3rd, meaning that the show’s winningest coach, Blake Shelton, would not be taking this year’s title.

In a shocking announcement, Team Kelly’s Brynn Cartelli took home the coveted Voice crown. Not only is she the youngest winner in the show’s history at 15, but the youngest contestant to ever compete. Cartelli’s win was also huge for first-time coach Kelly Clarkson who praised Brynn’s “old soul” and credited that trait for her success.

“I know she just turned 15 like a few weeks ago, but what’s kind of cool for me is we have a daughter that’s 16 about to be 17 and she’s very much older than her actual age – she’s very smart, very witty, very just adult – and Brynn is very much like that,” Clarkson said. “She’s very much an old soul, so I think that’s one thing that she’s got going for her.”

Congratulations to Brynn Cartelli! Watch one of our favorite performances from Brynn Cartelli as she sings “Here Comes Goodbye” by Rascal Flatts in the video below.