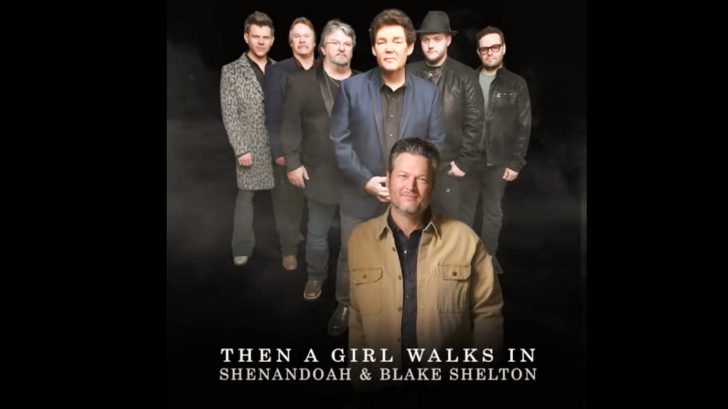 Shenandoah enlisted the help of a few famous friends when they were creating their album Every Road. The album, which came out on November 13, 2020, features Shenandoah singing alongside big names such as Brad Paisley, Dierks Bentley, and Lady A.

Another artist who contributed to the project was Blake Shelton. Shenandoah spoke to People about how their duet came to be.

As drummer Mike McGuire explained, Shenandoah took notice when Shelton kept assigning their songs to his team members on The Voice (he did so for four seasons in a row). This gave them a pretty good clue that Shelton is a fan of their music.

The group’s lead singer, Marty Raybon, ran into Shelton during the 2019 CMA Awards. That’s when he asked him if he’d like to be involved with their new record:

“Raybon told him about the project and said, ‘We want you on it.’ Shelton replied, ‘Send me the song and I’m in,'” People reports.

The song was “Then a Girl Walks In.” Shenandoah and Shelton decided to give fans a taste of the new album by releasing the song a bit early.

Raybon loves how the finished duet turned out. He told People Shelton was “a big piece” that made their new album complete:

“His vocals are as solid as a slab of concrete,” Raybon said. “This would not be a today’s country music duets album without him being a part of it.”

Tune in to the clip below to hear the official audio for Shenandoah and Shelton’s collaboration, “Then a Girl Walks In.” We’re anxious to hear all of them sing this together in person one day!