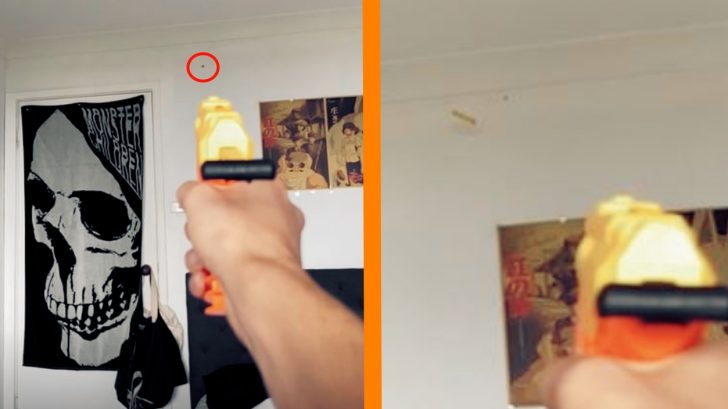 21-year-old psychology student and skateboarder, Lincoln Carroll, from Caves Beach, Australia shot a fly in his room with a Nerf gun and the video’s been raging on the internet.

Lincoln said he was bored in his home studying for an exam that he had later that evening when he spotted the pestering fly buzzing around the room. He said he’s not a professional Nerf gunner or anything but when he noticed the fly he pulled out his phone and started recording.

Lincoln thought it’d be funny to show his friends the video if he could actually film himself hitting the fly. He didn’t think it’d actually happen but when he pulled the trigger that Nerf gun dart flew through the air and hit the fly dead on.

“I was stoked,” Lincoln told UniLad. “I shouted out ‘Oh my God!’ and couldn’t really believe what just happened. I’ve never shot a fly out of the air before or done any impressive Nerf trick shots for that matter. I’ve only used a Nerf gun a handful of times, I just got lucky!”

No fly was injured in the shooting of this video, according to Lincoln. The fly landed on the bed stunned for a few seconds but then jump back up into the air and took off.