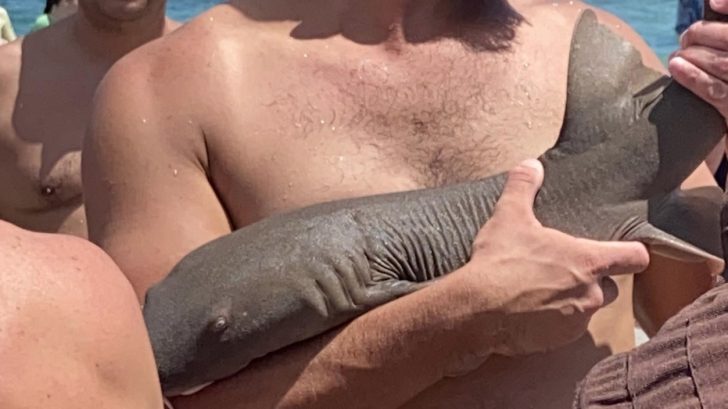 Jeremy Porter was enjoying a day at the beach on August, 31st, 2020 when he witnessed a man walking out of the ocean with a small shark cradled in his arms. The man allegedly grabbed onto the shark’s tail as it was swimming by him and, in defense, the shark turned around and latched onto the man’s arm.

“All, please know, this shark did not go after this guy. This guy grabbed the shark and the shark bite [sic] him. Hopefully lesson learned for this guy,” Jeremy wrote on Facebook.

According to CBS 12, it happened at Jensen Beach, Florida. Lifeguard Brian Bricious and the Martin County Fire Department were the first to respond to the scene to try to help. Everyone gathered around them as the man he calmly spoke with Bricious and the firemen.

“A beach patron came up to the tower and advised me that this guy needed help out on the sandbar with a shark that was stuck to his arm,” Lifeguard Bricious said. “Just when you think you’ve seen it all, something comes along and surprises you.”

Bricious said that these sharks typically only attack humans when provoked and ever since it bit down, the shark made up its mind that it’s not letting go. Nothing the guy did would get the sharked to let go, so firemen poured some sort of liquid on the shark’s mouth about about 20 minutes later it finally let go. They released the shark back into the sea.