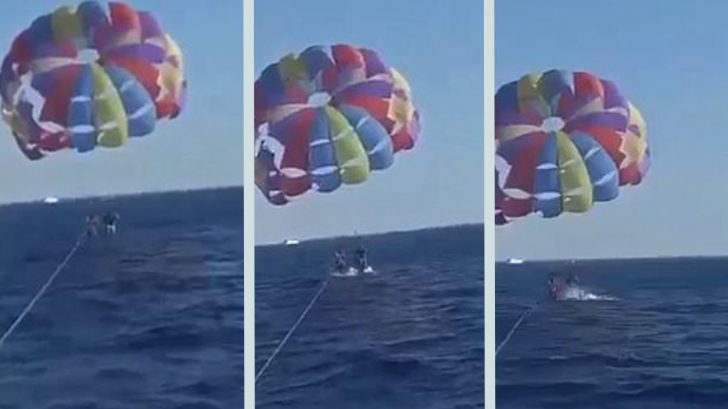 An extremely rare and shocking shark attack was filmed as a parasailer was being pulled behind a boat on the Red Sea just off the coast of the city Aqaba.

The footage showed a 37-year-old Jordanian man strapped to a tandem parasail with a companion as they were being pulled by the boat. The two were hovering just over the water and kicking the surface with their feet when the attack took place.

Another person on the boat filmed the shocking footage of a massive shark leaping out of the water and biting down on the man’s leg. It all happened so quickly.

The person filming must have said something about it because the captain of the boat hit the gas to lifted the parasailers out of the water and away from more potential attacks. However, the man was badly bleeding at this point and was holding his foot up that was heavily damaged.

He was quickly taken to the Prince Hashem Military Hospital where they found he had severed tendons, torn muscles, broke several bones, and had lost part of the back of his foot. The hospital operated on him and say that he is in stable condition.

Nayef Al Bakhit of the Aqaba Special Economic Zone Authority said they have launched an investigation into what happened and will issue a detailed statement as soon as it’s complete. In the meantime, take a look at the shocking footage of the attack below.