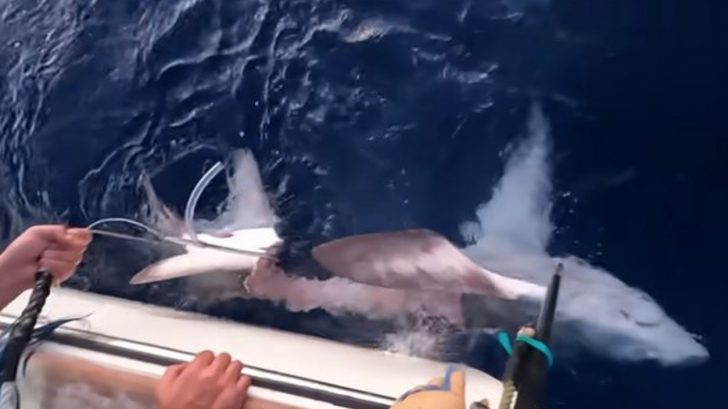 Sammy Hitzke and his fishermen buddy Shaun Whale filmed a spectacular video of them reeling in a giant thresher shark off the coast of Australia and were shocked to find the animal had been one-third eaten by the time it got up to the boat.

A 30-minute video shared to the YouTube channel, Sammy Hitzke Fishing, shows the fishermen hooked to the massive shark. They said it took over four-and-a-half hours to reel it to the boat.

As Sammy hauls in the dead shark he says, “There he is. It’s big and long. It’s a shark. It looks like the shark has been sharked. I don’t know what’s going on there. It’s a massive thresher.”

You can see in the video that both Sammy and Shaun were blown away when they hauled the shark onboard to discover its condition.

Sammy said, “This is epic, proper epic. He’s got three-quarters of himself missing. That is a proper monster of the deep.”

Shaun chimed in and said that the catch of the half-eaten shark was a find of a lifetime.

Shaun said, “I’m absolutely exhausted but this might be the craziest thing I’ve ever seen in the ocean. I’ve done a lot of fishing, spent a lot of time out on the big blue, and not once did I think I’d find a thresher shark eaten by something that, I imagine, was absolutely massive. This is a true predator of the depths – now he’s just food for another shark. That is a find of a lifetime.”

The video was posted on April 2 and since then it has been viewed more than 181 thousand times with hundreds of people leaving comments.

One commenter wrote, “That was sick! Can’t imagine the muscle pain you guys had the next two days.”

Another commented, “Wow! It’s not just the size and species that is incredible, it’s the circumstances surrounding the captures.”

Other people in the comments believe that it might have been a giant squid responsible for the death and big chunks taken out of the thresher shark’s body.

“The shark appears to have been attacked by a giant squid. The damage doesn’t look like it was done by another shark,” someone said.

Another wrote, “Could have been a shark that originally chomped the thresher, but there was 100% squid involvement at some point because sharks don’t leave just the backbone like that.”

Watch The Video Below Showing The Half-Eaten Shark