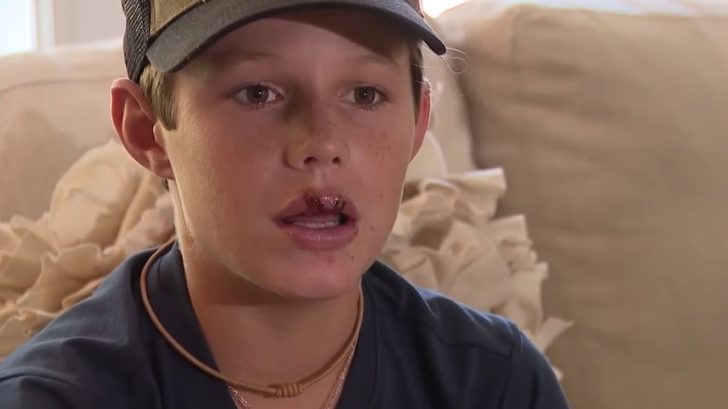 A 13-year-old boy was bitten in the face by a shark off the coast of Florida while he was catching lobsters with his mom and dad.

“He just popped up screaming ‘mom, mom, shark! Get me out of here! Get me out of the water!’” said Fischer Hricko’s mom, Rhiannon, in an interview with FOX 35.

“I saw a big one and I got it in my hand. On the way up, when I had the lobster in my hand, I felt a little tap on the back of my leg, and I looked behind me and the shark was in my face,” Fischer said.

Rhiannon said she was driving the boat and her son and his dad were in the water when it all went down.

“It was honestly the scariest five minutes of my life. Just hearing that terror in your child’s voice it’s something that I can’t actually get out of my head,” she said.

Fischer swam back to the boat with his dad and they all rushed back to the dock to transport him to the hospital. The boy had to get 10 stitches in his lip from the shark’s bite but overall, he was in good condition.

“It hurts every so often, but it’s fine now,” he said.

He’s on the path to a fast recovery and says that the shark’s bite won’t be enough to keep him out of the ocean.

“I’m ready, but I feel like the first few times I’ll be a little scared, but I’ll get in the water,” he said.

Mom said she’ll probably stay in the boat.“I guess it was always in the back of my head. That’s why I don’t jump in,” she said, laughing.

The boy speaks about the encounter in the video below.