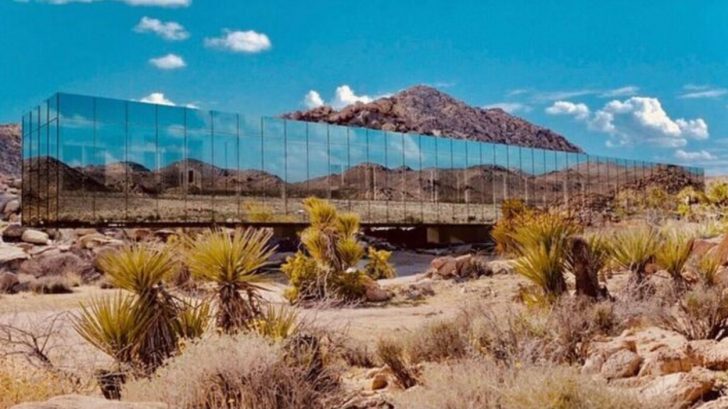 The Invisible House, located in the Mojave Desert, is an architectural masterpiece known for its reflective glass exterior that mirrors the rocky landscape, making it appear invisible from certain angles, and guess what? It’s for sale!

The minimalist structure, which was completed in 2019, was designed by legendary Los Angeles architect Tomas Osinski in collaboration with Chris Hanley, an indie film producer best known for his work on American Psycho.

Chris and his wife Roberta Hanley, who purchased the land in the early 2000s, had originally built a vacation home on the property, but later found out that it didn’t adhere to local regulations, prompting the construction of the Invisible House.

“I just drew a rectangle on paper and said, ‘OK, we’ll build this,’” he told the Robb Report. “I thought it could just be a monolithic, reflective, ultra-minimal thing.”

Measuring roughly 225 feet, the house is cantilevered off the ground using concrete columns to prevent disturbance to the area’s giant boulders.

The facade is wrapped in $700,000 worth of heat-reflecting Solarcool glass which not only gives the exterior its mirror-like appearance but also filters ultraviolet rays and infrared frequencies, making it a sustainable option.

The Invisible House also employs a solar-thermal system to generate electricity and hot water and has eco-friendly foam roofing.

Throughout the years, the Invisible House has made multiple TV appearances, served as a shooting location for advertising campaigns, and captured the attention of A-listers.

It has also starred in season two of The World’s Most Amazing Vacation Rentals on Netflix and appeared on Bling Empire. The house is now on the market for $18 million and is being listed by Aaron Kirman and Matt Adamo of AKG | Christie’s International Real Estate.

Overall, the Invisible House is an architectural masterpiece that showcases the beauty of sustainable design and desert living. Its minimalist design, reflective glass exterior, and eco-friendly features make it a one-of-a-kind property that is sure to capture the attention of anyone looking to buy this unique desert oasis.

See Footage Of The Invisible Home Below