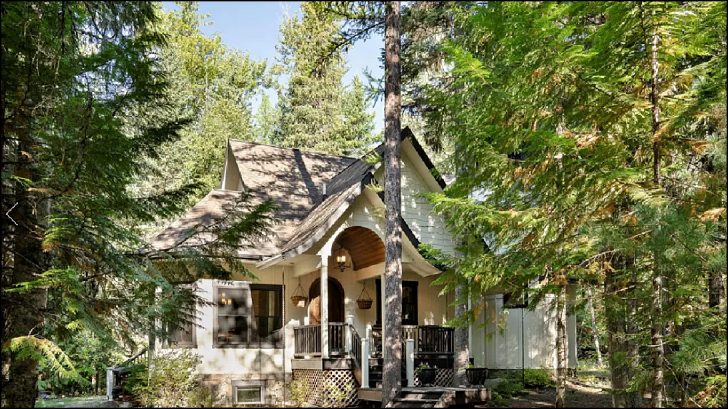 Few people are lucky enough to call Glacier National Park home, but you can be one of them for a mere $12 million.

A rare home recently went on the market in northern Montana that sits on .77 acres, but has a backyard unlike any in the world…over one million acres of national park.

Named the Glacier Bear Retreat, the home boasts six bedrooms, four-and-a-half bathrooms and a secret round room hidden behind a bookcase. While this home isn’t the only one to exist in the park, it is one of the few that offers full ownership instead of a lease, making it especially rare.

“It’s very unusual to have a simple deeded piece of property within the park boundaries,” listing agent Scott Darkenwald said. “For someone to be able to actually say they have a home inside any of our national parks is unusual.”

The home’s current owner, Gail Lynne Goodwin, purchased the home in 2013 and was surprised to find that the property sat within Glacier National Park’s borders.

“[The house] had not been lived in by humans in the prior 42 years, so there was every kind of critter in there,” said Goodwin, a real estate developer and founder of Inspire Me Today, a website that shares daily inspiration with readers in more than 180 countries.

Goodwin explained that the property was first owned by Milo Apgar, an early settler whose name is on Glacier’s historic Apgar Village. In 1947, park ranger Dwight Grist purchased the home and raised his family there.

Goodwin purchased the property from James Grist, Dwight’s son. At the time, it was the first time a private buyer had purchased property within the park in 24 years.

The original home is long gone, but a new 3300-square-foot lodge now stands in its place. Filled with flawless wood and stone work, the home has much to offer to a new buyer, including a game room, a bunk room, a screened-in porch, a firepit and a hot tub.

Perhaps most importantly, the Glacier Bear Retreat offers peace, quiet and a short walk to incomparable view of the majestic mountains of Glacier National Park.

See photos of the property below, and click HERE to see the real estate listing.