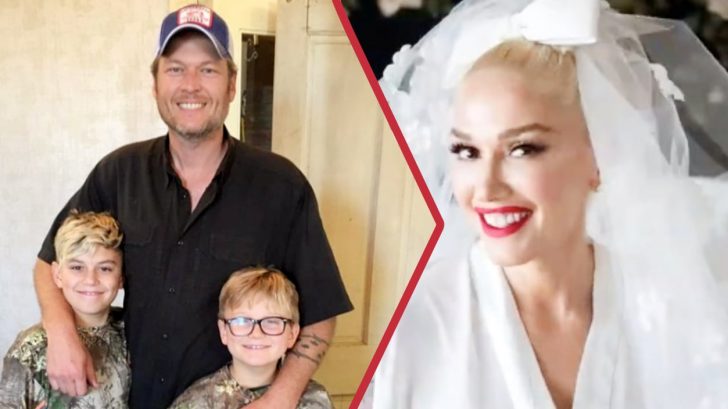 In October 2020, Blake Shelton proposed to his longtime girlfriend and fellow Voice coach Gwen Stefani. At the time, the couple didn’t know when they’d be able to have their wedding due to everything going on in the world.

Blake and Gwen did know that summer would be the ideal time for a ceremony, since it would fall in between seasons of The Voice. Although Gwen is not currently a coach on the show, Blake remains dedicated to the competition series.

As the world environment improved, it became clear that Blake and Gwen were moving forward with their summer wedding plans. On June 29, news broke that the couple applied for a marriage license in Blake’s home state of Oklahoma. Marriage licenses in the county they applied in are only valid for ten days, so people assumed Blake and Gwen would tie the knot over the 4th of July weekend.

It turns out those assumptions were correct! Page Six shared the first photos from the couple’s intimate ceremony, which was held on Blake’s property in Oklahoma on July 3. Page Six’s aerial photos show wedding decorations and some of the guests, including Gwen’s parents.

TODAY later confirmed that 40 of Blake and Gwen’s nearest and dearest were in attendance to watch them say “I do” at the private chapel Blake had built on the property. Voice host Carson Daly served as the officiant.

Blake and Gwen didn’t share any photos from their wedding until two days later, on July 5. The stunning photos show Gwen in her custom Vera Wang dress, which she accessorized with tall white boots, her signature red lipstick, and a long veil.

Gwen’s veil also contained a subtle tribute to her new husband, as well as her three sons: Kingston, Zuma, and Apollo.

One photo posted by stylist Rob Zangardi show how the base of Gwen’s veil had her and Blake’s name stitched on it. The names of her sons followed in the order of their birth.

You can only see eldest son Kingston’s name in the photo, but Rob indicated that all three boys’ names were present through his caption, which read. “GWEN BLAKE KINGSTON ZUMA APOLLO.”

The couple’s wedding photographer later shared another photo of Gwen that showcases all of the names embodied on her veil. Check out both photos below.

What a sweet way for Gwen to honor her boys at her wedding!

Since Blake and Gwen have been together for so long, he’s become close to her sons. Check out the interview below to listen to him talk about his relationship with Kingston, Zuma, and Apollo.

Congratulations to Blake and Gwen on their marriage! May they enjoy many happy years together.