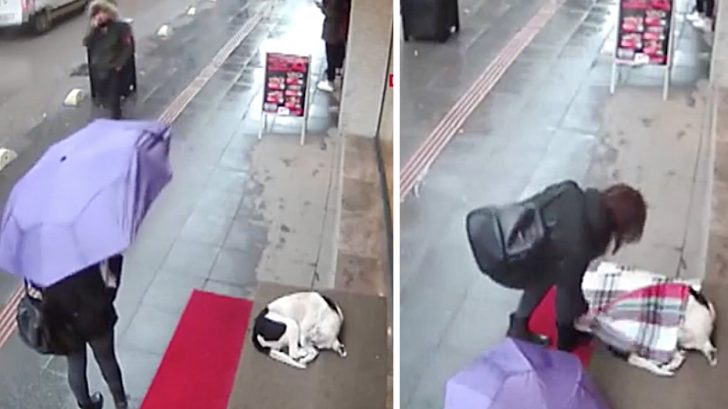 Winter for many of us is a time where we have to bundle up in extra layers to make sure we don’t freeze when we venture outside. Most of us, fortunately, have a warm and cozy home to return to at the end of the day that keeps us comfortable.

For stray animals, though, it can be a much harder time for them. They usually have to endure the extreme weather and sometimes if they’re lucky someone will offer them some food or shelter for the night.

During a cold, rainy day in Zonguldak, Turkey a woman was spotted on security cameras walking out of a supermarket. As she stepped outside to pull out her umbrella she noticed a stray dog sleeping on the concrete curled up trying to stay warm.

Before walking away to continue her day, she takes off her scarf and folds it into a double-layered blanket and covers the dog with it. The poor pup lifts his head to see what’s going to and realizes he’s receiving a gracious present.

She then walks away as the dog tucks his head more into the blanket. Little did she know however, the store would find the footage and give it over to several news sources. A friend of hers eventually saw the video in the media and recognized it was her friend, Duygu Elma. Once people knew who the kindhearted woman was they began to shower her with the praise she deserved.

“I couldn’t imagine that my actions would receive this attention. I’m very surprised about it,” Duygu told The Dodo. “The weather was so cold. I just couldn’t take it when I saw him shivering.”

Watch Kindhearted Woman Give Her Scarf To Dog Below