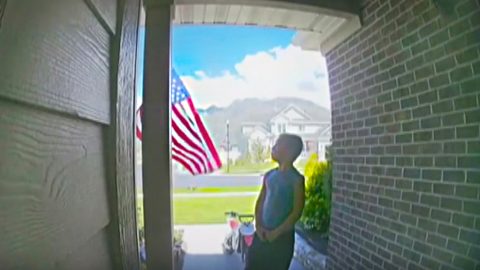 It is a known fact that kids often do things we would never expect when no one is watching. For this unsuspecting Utah boy, he got the attention of not just his parents – but the entire country with his actions.

His Action Gets Noticed

As he was riding around the neighborhood on his motorbike, seven-year-old Wyatt stopped in front of his neighbor’s home. Before ringing the doorbell, he stopped his bike, put his hand over his heart and recited the Pledge of Allegiance.

In a now deleted tweet, the user wrote, “Wyatt can be heard in the video saying, “I pledge Allegiance to the flag/ of the United States of America/ and to the Republic for which it stands/ one nation under God, indivisible/ with Liberty and Justice for all.”

The whole thing was caught on the neighbor’s security camera. You can see that even after pledging his allegiance, Wyatt continues showing respect and watches the flag blowing – knowing exactly what it stands for.

His Mother’s Response Will Melt Your Heart

After the neighbor shared the video with his mother, Jami Warner – she posted it to social media. The video quickly went viral and she told Fox News, “I wished I could show it to every parent who feels like what they teach their kids goes in one ear and out the other. We try to teach our three kids about how lucky they are to live in this country and about the men and women who have served and died for our freedom.”

An Outpour Of Love From The Community

For his amazing level of respect for the flag, this little guy has received a lot of love and support from social media. The overall sentiment is that this kid was raised just right.

They say… "the greatest work you will ever do is within the walls of your own home."I am one of those parents, along…

His parents’ emphasis on respect has obviously paid off. You can watch Wyatt’s remarkable act of reverence in the video below.