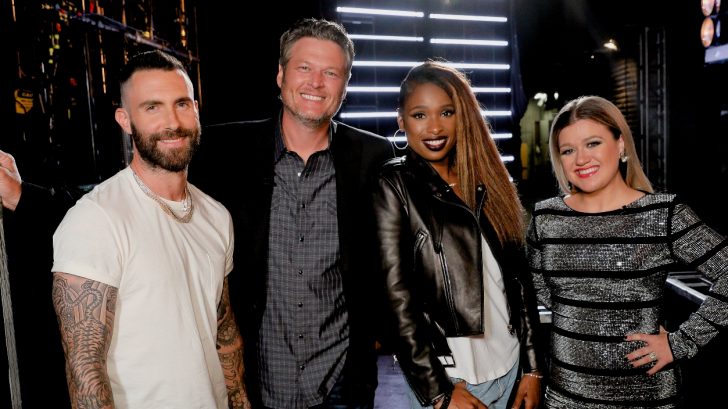 During a Season 15 episode of NBC’s famous singing competition, The Voice, all four coaches were waiting during a commercial break and decided to have a little fun!

Seated in their giant red chairs, all four coaches kicked off into an impromptu a cappella performance of one of the most famous television theme songs to ever exist!

.@coltonasmith and @PatriqueFortson are switching it up and OWNING IT. They’re singing “God Gave Me You” by our very own @blakeshelton. #VoiceBattles pic.twitter.com/VQacZDnniz

For the first part of this season’s Battle Round episodes, each team faced a unique song that was split into two parts – but only one would emerge the victor.

As Blake Shelton, Kelly Clarkson, Jennifer Hudson, and the ever-hysterical Adam Levine sat and waited between performances, they decided to kick off on an epic four-part performance of the Golden Girls’ theme song, “Thank You For Being A Friend.”

Just like a bunch of these incredible performances from these super-talented singers, these four powerhouse coaches deliver an undeniable a cappella rendition of this famous hit that even Blanche would like!

Jennifer Hudson kicks off this riffing session with the first line and Blake turns to her in excitement – all ready to deliver the second line. His smooth voice ringing out like melted butter, the other coaches can’t help but join in, too!

A classic song that nearly everyone knows by heart, it’s been covered by folks across all genres – so for this varied genre group of singers, it was a no-brainer!

If you’re ready for a good laugh and a great sing-a-long tune from your favorite coaches, look no further than the video below!

We can’t help but watch this over and over again! Tell us in the comments if you think they should do a full performance of it!