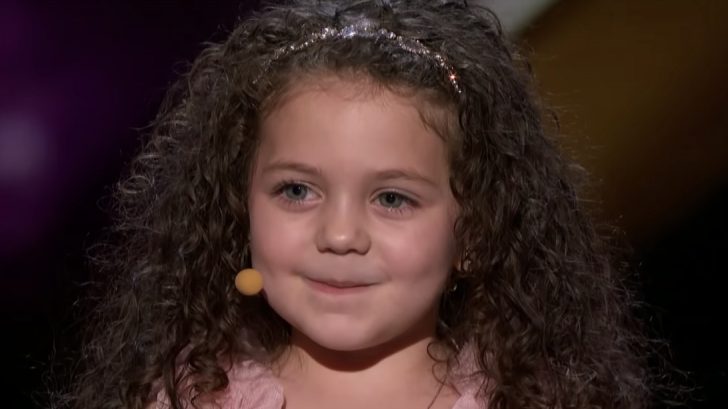 Start spreading the news! America’s Got Talent debuted its youngest contestant ever during Season 13, and she was magnificent!

5-year-old Sophie Fatu won over America as her powerful vocals belied her youth. Not only does Sophie have a voice that will blow you away, she is incredibly talented. While most kids her age are thinking about starting kindergarten, Sophie’s attention is on her singing career….something she wants to do simply because she loves to sing.

When Simon Cowell asked Sophie what she’d do with the $1 million prize, she responded, “I don’t really care about money. I just want to sing for everyone and make them happy.”

Sophie then belted out a nearly pitch-perfect rendition of Frank Sinatra’s hit “New York, New York.” Her rendition drew applause and smiles from both the crowd and the judges as she poured her heart into familiar song.

“You know, Sophie, you are officially the youngest ever America’s Got Talent contestant, do you know that?” Simon Cowell said after Sophie’s performance. “You shouldn’t even be able to remember the words, let alone sing like that with the key change and everything. Amazing.”

Fellow AGT judge Mel B praised the maturity in Sophie’s voice, saying, “When you hold onto those long notes you have like a really rich vibrato, which is so strange I’m even saying that because you’re only five.”

But, despite the judges’ praise, Sophie didn’t advance to the live shows. The good news is that Sophie has a YouTube channel that is jam-packed with amazing performances that are sure to bring lots of smiles to many faces. Check out Sophie’s YouTube channel here.

Watch Sophie Fatu sing “New York, New York” on America’s Got Talent in the video below.