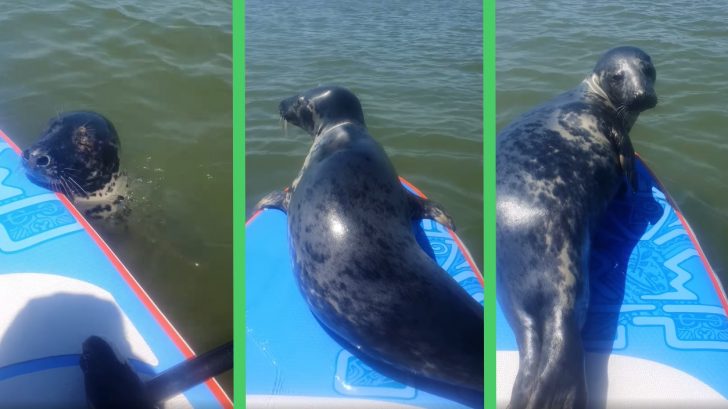 A paddleboarder was sitting in the ocean off the coast of the United Kingdom when a friendly seal surprised him by climbing onto his paddleboard.

It was just another day on the water for Cenk Albayrak-Touye who lives in Dorset, England when he had the wild encounter. Fortunately, he happened to have his camera in his hand when he spotted the seal popping its head up out of the water and started recording it.

“Looking back on it, I can’t quite believe it happened, let alone to me. Thank goodness I had my phone on me to catch the moment,” he told The Dodo.

Cenk filmed the seal curiously breaching the water so it could investigate the paddleboard. It was probably thinking it was a good spot for it to get out of the water and rest.

The seal climbs onto the paddleboard as if it knew who Cenk was and calmly laid at the front of the board. For a good minute, it laid on there relaxing and letting the sun warm its body. The seal only stayed for a brief moment but it was certainly a moment Cenk will never forget.

“I would definitely welcome him back,” Cenk said.

Watch Footage Of The Seal On Paddleboard Below