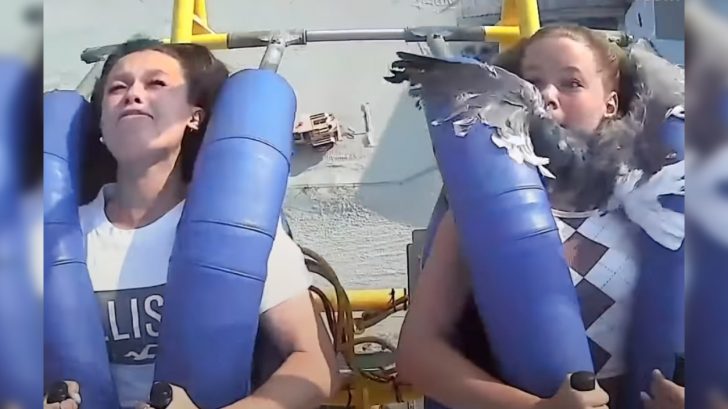 “I saw it on the internet, people trying to catch them and, I don’t know, I just thought it would be cool,” Kiley told ABC7. She loves animals and said the experience was a dream come true, however, totally accidental.

The girls were celebrating Georgia’s 14th birthday at Jersey Shore’s Morey’s Piers in Wildwood, New Jersey, and decided to go on a park ride called the SpringShot.

It’s a ride that shoots you into the air at speeds over 75mph and spins you for a good 60 seconds before lowering you back down to the ground.

As the ladies blasted off into the air, within the first two or three seconds a seagull can be seen on the video landing on Kiley’s neck. She was sincerely surprised and confused at what just happened.

“When I got shot up, then I saw it. It was going the opposite way and then it came back and hit me right in the face,” Kiley said. “It felt really light and it only left like the tiniest scratch.”

She was able to move the bird off her neck and back into the sky where it seemingly flew off uninjured. After taking it all in for a second, Kiley busted out laughing at the whole situation as she told her friend what happened.

“I can’t wait to see this video,” Kiley said while still riding on the ride.

When asked if she would ever ride the SpringShot again, Kiley said she definitely will.

Watch Footage Of Girl Catching The Seagull Below