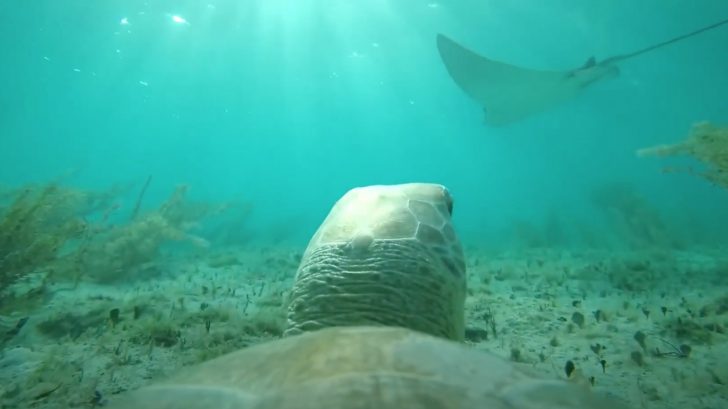 Marine biologist Nathan Jack Robinson from Valencia, Spain started a foundation called Fundacion Oceanografic where he deploys cameras strapped to the shells of living sea turtles that gives viewers an incredible look at life under the sea.

The agenda of the Fundacion Oceanografic group is to raise awareness of marine life and help create a strategy to conserve them. With the TurtleCam, people can observe sea turtles and other marine life that’s encountered to gain an understanding of marine life behavior.

“I love the TurtleCam project because it helps people to engage with these animals and, as such, it is a engaging platform to raise awareness about marine conservation,” Nathan said, according to Play Stuff.

The TurtleCam project was funded by West Connecticut State University (WCSU), WCSU’s Finding Our Way project, and the Cape Eleuthera Institute. The project was also supported by the National Oceanic and Atmospheric Administration’s National Marine Fisheries Service and Office of Education through its New England B-WET Program

The footage you’re about to see was taken off the coast of the island of Eleuthera in The Bahamas. They’re hoping this footage will get people excited about conserving marine life.

“If we can get people excited about sea turtles, this is often the impetus that people need to live to eco-friendly lives. And if the whole world is on-board, we are going to be successful,” Nathan said.

Sea turtles… with cameras on their shells

Sea turtles… with cameras on their shells