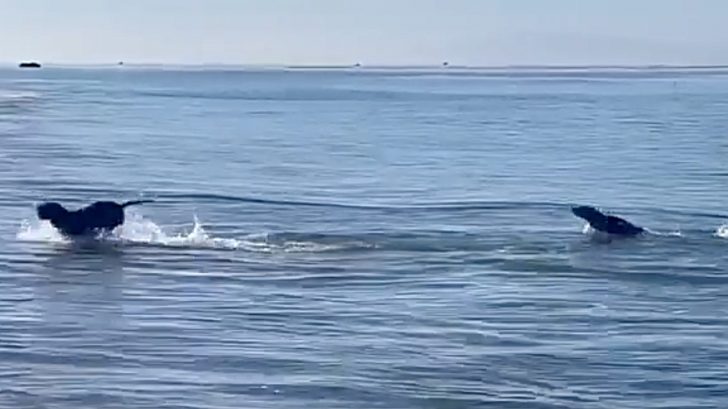 An incredible video is warming hearts all around the world right now as the footage was captured of a chocolate lab having fun in the sun with an adorable young sea lion.

Dave “Nelly” Nelson was taking his dog Moe on a walk near 26th Street in Santa Cruz, California when he captured the friendly encounter of the land and sea animal playing together.

“At one point Moe actually dropped her ball and waded out and they went nose to nose for a second – it was so cute!” Dave told FTW Outdoors. “Moe smelled him and he gave a little loving bark and that’s why I pulled my phone out [to capture video footage], because they were totally playing.”

The video shows the dog on the beach wagging her tail as the sea lion was wading in the shallows of the ocean only a few feet away from Dave and his pet.

Everyone was so happy. As Moe danced around in the sand waiting for her owner to throw the ball, the curious sea lion waited, watching as Dave pulled his hand back to toss the ball into the ocean.

Using a ball-throwing stick, he launches the ball into the water about 20-30 feet out from the shoreline. Moe takes off running as fast as she can and the sea lion watches the dog for a second before realizing what’s going on and it too starts swimming for the ball.

Moe has played this game before so she was a few steps ahead of the sea lion but nevertheless when Moe grab the ball the sea lion happily swam around him enjoying the fun time together.

“Moe is the local pup down there and the [sea lion] definitely felt the good vibes she puts off,” Nelson said.

Moe promptly brings the ball back to Dave before the video shuts off, but Dave said that they went on for a while walking up the beach playing fetch, and hanging out with the sea lion.

Watch The Heartwarming Footage Below