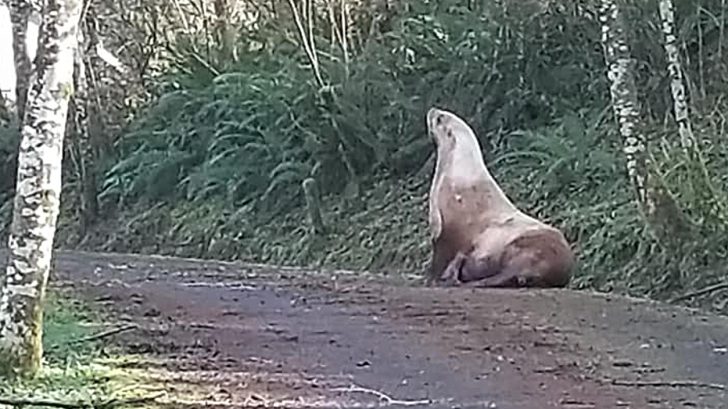 In Castle Rock, Washington, 50 miles from the ocean a wayward sea lion was spotted blocking the road by a Cowlitz Country Sheriff’s Sergeant patrolling the area on Sunday morning (Feb. 23).

The sergeant, Corey Huffine, found the sea lion specifically on Garlock Road, which is close to some small creeks but nowhere close to big waterways. The closest big waterways are Cowlitz River and the Columbia River but the sea lion wasn’t close to any of those.

Most sea lions weigh about 600 pounds and this one looked full grown so they had to call in the Washington State Department of Fish and Wildlife officials to deal with the situation. The officials shortly arrived on the scene with a trailer and a cage big enough to fit the sea lion in and transported it to the Columbia River to be released.

Still, it was pretty strange to find a wild sea lion roaming around the back roads in the woods. There was no feedback on how it got there. Did it really wander all the way there or did someone let it loose? Nobody truly knows. However, officials believe that it most likely swam up a small creek connected to the Cowlitz River and this is only the second time in history a sea lion has been reported to do this.

Video News Report On The Sea Lion Below