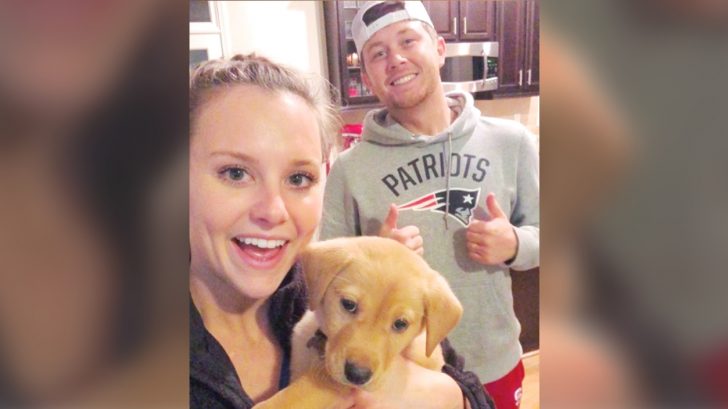 The past year has been an eventful one for Scotty McCreery. He released a new album, titled Seasons Change, and earned his first number one hit with the emotional single “Five More Minutes.”

While it was a big career year for Scotty, it was also a monumental year on a personal level, with the highlight being his marriage to longtime sweetheart, Gabi Dugal.

The couple hadn’t lived together prior to marriage, so when they returned from their Tahiti honeymoon they got the chance to embark on a whole new adventure together…the adventure of moving in together!

Speaking to People prior to their June nuptials, Scotty said that he was looking forward to living with Gabi after living with his friends in the past.

“I love my guys, but it’ll be much nicer coming back from the road and seeing my wife instead of three motley dudes,” he said.

A couple of months later, Scotty spoke to People yet again to share how married life was treating him, and based on how much he loves saying “my wife,” we’d say all is good!

Starting Their Family With A Furry Friend

Scotty also shared what he and Gabi were planning on for their future. While kids aren’t on the immediate horizon, Scotty did say that the two of them wanted to welcome a new family member soon. Only the kind he was talking about is of the four-legged variety!

He said that Gabi has long wanted a yellow lab puppy, and revealed that she would finally be getting one in early 2019. But he also made it clear that pup probably wouldn’t be their last.

“I’m eventually going to get my English bulldog,” he said. “I’m patient, if that needs to be a year or so. Start with one and make sure we can keep it going. We’ll see.”

Happy Valentines Day to this cute pup, @GabiDugal! You've been this mans best friend for over 5 years now, and you don't bark at me too much (unless I deserve it..lol). You're the perfect pup! Love you!

Well, let the experiment begin, because Scotty and Gabi recently welcomed their new furry family member into their home! His name is Moose, and he has already stolen his parents’ hearts…and the hearts of those who follow them on social media.

While Scotty and Gabi’s social media feeds are full of Moose pictures, fans of the pup can find even more on his personal Instagram. There you’ll find precious snapshots of the little guy doing things puppies do…like stealing his mom’s bunny slippers!

When mom’s away, Moose will play (with her bunny slippers)… 😊🐰😇

A Pup In The Spotlight

Based on how much of a following Moose has generated already, you can only imagine how surprised one of Scotty’s audiences was when the pup came out on stage during his set! Moose made his stage debut alongside mama Gabi, and a photographer captured the precious moment in a series of adorable snapshots.

Both Scotty and Gabi shared the photos on their respective social media accounts, and couldn’t help but gush over their new family member.

“We love watching you shine @scottymcreery,” Gabi wrote, “and Moose loved meeting all the new friends!”

Bring the fam to work was a success this weekend!! 👦🏻🐶👧🏽 We love watching you shine @scottymccreery 🤩💕 and Moose loved meeting all the new friends! 🐾

Moose may just be a young pup, but he already seems to be a natural in front of a crowd!

This moment may have been Moose’s stage debut, but it wasn’t Gabi’s. She has famously joined her husband on stage before, and fans have always been delighted to see her.

During one August show, just months after their marriage, Scotty had Gabi join him onstage as he sang the song he wrote to celebrate their engagement “This Is It.” You can watch that loving moment in the clip below.

Based on how successful Moose’s stage debut was, we have a feeling we’ll be seeing a lot more of him and Gabi at Scotty’s shows from now on!