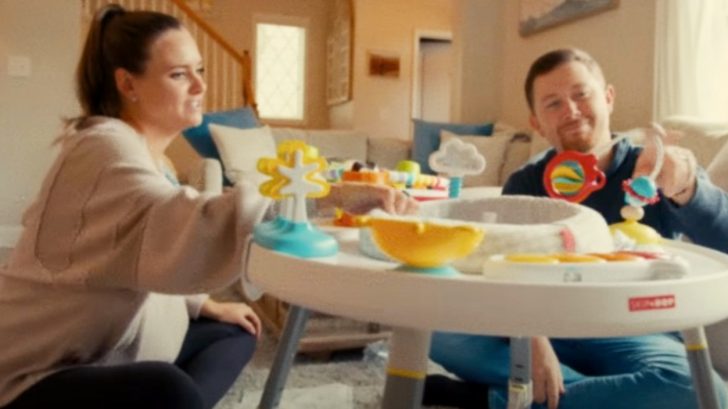 In September, Scotty McCreery announced the release of his next single, “It Matters to Her.” Scotty explained the meaning behind the song, saying:

“I wrote this song with Rhett Akins and Lee Thomas Miller because after four years of marriage to Gabi, I’ve learned a few things. This song sums up some of those lessons!“

Gabi was pregnant when Scotty released “It Matters to Her.” Their son Merrick “Avery” McCreery was born one month later on October 24.

“Never known a love like this…Merrick ‘Avery’ McCreery joined us 11 days early on October 24th at 4:34am! 7 lbs 13oz of nothin but love,” Scotty and Gabi shared in a message alongside some of Avery’s first photos.

Now that Avery is here, Scotty is looking back on Gabi’s pregnancy in the newly released music video for “It Matters to Her.”

“I wanted to really focus the video on Gabi and our preparations for Avery’s arrival,” Scotty said in a press release about the video. “We filmed some of it over the course of several months at home in Raleigh when we were getting the nursery ready. We also filmed some of it at our place at North Topsail Beach. I think you can see in the video how excited we were getting for Avery to get here as well as how amazing Gabi was throughout the entire pregnancy.“

The video shows clips of the couple preparing for Avery’s birth, with scenes of them painting the nursery and putting the crib together. We also see Scotty doting on Gabi in many heartwarming moments. The video ends with the announcement of Avery’s arrival, and shows some of his first pictures.

Head below to watch Scotty’s moving music video for “It Matters to Her.” Congratulations to him and Gabi on the birth of their baby boy!