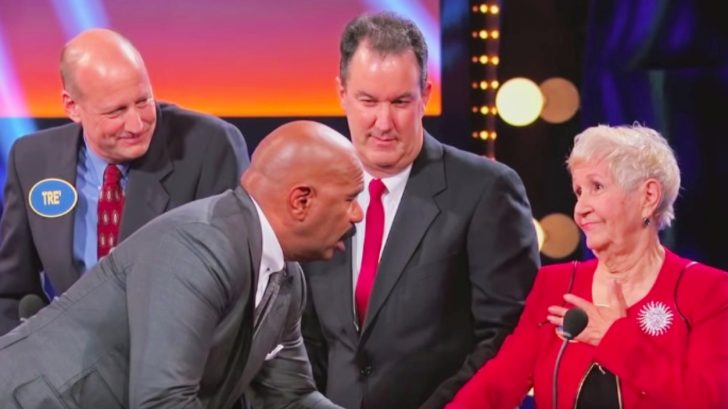 Over the years, Family Feud has served as a great source of laughs. The main comedic duties fall on the host, a position which has been filled by everyone from Richard Dawson to Home Improvement‘s Richard Kern.

The current host of Family Feud is Steve Harvey, and it makes perfect sense why.

Steve often has the best jokes to tell that always manage to get a chuckle out of everyone watching.

But in recent years, it seems that the contestants have become just as comedic as Steve. This makes the show all the more hilarious, as Steve has some pretty priceless reactions to the off-the-wall things the contestants say.

One of your favorite country stars was somewhat responsible for creating what be one of the most hysterical moments on the show to date. That star was none other than Scotty McCreery!

Scotty brought along his then-fiancée (now-wife) Gabi, his dad Mike, his grandma Paquita, and Gabi’s dad Merrick. He was hopeful that they would help him win the $25,000 grand prize for his charity of choice, St. Jude’s Children’s Research Hospital.

Scotty’s Grandma Gets Her Flirt On

He assembled one talented team, because they went on to win the main game against comedian/actor Chris Kattan’s family and then crushed the final “Fast Money” round. Of course, there were plenty of hysterical moments leading up to his big win.

One of the most comical interactions was between Steve and Paquita when Steve walked over to her to answer a question.

Paquita begged Steve to treat her good, which prompted Steve to compliment her. The following exchange ensued, and it was all sorts of chaos:

Steve: “I’m here for you because I love you.”

Paquita’s attempts to flirt with Steve resulted in a priceless reaction from him.

Scotty and his family couldn’t stop cracking up after watching Paquita make a move on Steve. You’re sure to be left in stitches by the time you’re through watching her too.

If you’re in need of one more good laugh, watch another hilarious moment from Scotty’s episode of Family Feud in the clip below.